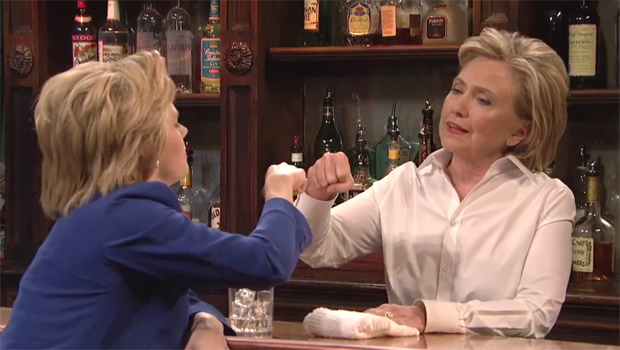 WASHINGTON -- Set 'em up, Hillary Rodham Clinton, and lend an ear to the troubles of a presidential candidate.

The front-runner for the Democratic nomination appeared on the season opener of "Saturday Night Live" as a wise bartender named Val who pours a drink or two for, ahem, Hillary Clinton (played by "SNL" regular Kate McKinnon).

Most political candidates play themselves on "SNL," often for just a cameo in a sketch or to declare the show's famous tag line, "Live from New York - it's Saturday night!" Seldom do they go all-out thespian and play a character in a sketch.

"So, Hillary," Clinton asks McKinnon, "what brings you here tonight?"

Asked what she does for a living, McKinnon says in imitation of Clinton's earnest monotone: "First, I am a grandmother. Second, I am a human, entrusted with this one green Earth."

And just who is Val? Clinton deadpans, "I'm just an ordinary citizen who believes the Keystone pipeline will destroy our environment."

"I agree with you there. It did take me a long time to decide that, but I am against it," McKinnon replied.

The skit poked gentle fun at Clinton's slow opposition to the pipeline, her late-arriving support of same-sex marriage ("I could have supported it sooner," McKinnon said), and her inability to take a vacation. Notably absent was a crack about her private email server, the source of months of criticism from Republican lawmakers and candidates.

Speaking of Republican candidates, at one point Clinton - the real one - mimicked Donald Trump with a hoarse, throaty rendition of his dismissive statement, "Uh, you're all losers," prompting McKinnon to break into laughter.

"Do you think he'll win the primaries?" Clinton, playing the bartender, asked.

"He must. I want be the one to take him down. I will destroy him and I will mount his hair in the Oval Office," McKinnon responded.

In a nod to the past, former cast member Darrell Hammond showed up on a barstool as Bill Clinton, who takes a look at Clinton and McKinnon and says, "My god, they're multiplying!"

The skit closed with McKinnon breaking into a rendition of the song, "Lean on Me," and Clinton walking around the bar to join her. Then "SNL" actress Cecily Strong, playing Clinton aide Huma Abedin, comes to retrieve her boss from the bar.

Clinton has disappeared from the set and Strong implies she may have had one too many drinks.

"She was real, and smart, and really nice and personable!" McKinnon said.

But then she sees a tan women's business shoe, and declares, "I was right! She is real!"

Overall, the skit was friendly toward Clinton, who also had another role in the show - introducing the first musical number by host Miley Cyrus.

Republicans did not fare nearly as well as "SNL" began its 41st season. The opening sketch made fun of Trump and his wife, Melania, and a faux commercial pitched a pill that cures people of thinking they can be president - specifically low-polling GOP candidates Rick Santorum, Mike Huckabee and Jim Gilmore.

Clinton has struggled at times to show herself as warm and personable with a sense of humor, qualities that have been valued in modern campaigns driven by broadcast media and now social media. The former secretary of state has already appeared this year on talk shows hosted by Jimmy Fallon and Ellen DeGeneres.