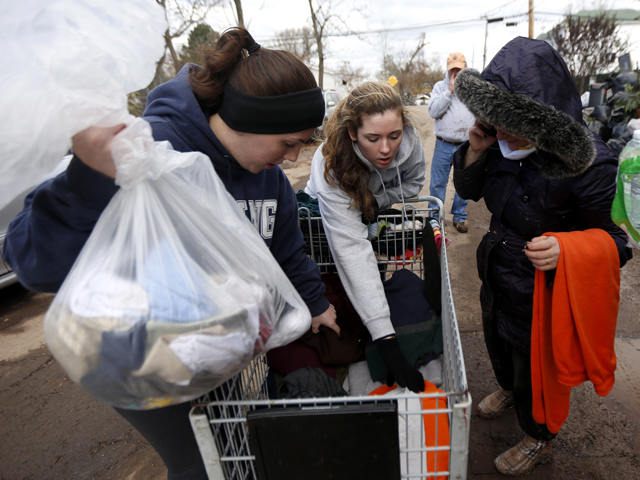 NEW YORK Normally on a Saturday morning, Erica Siegel, a 33-year-old real estate agent, would be working or taking a run. But this weekend found her packing rolls of toilet paper, boxes of garbage bags, and canned vegetables and soups to bring to a Queens park, where they would be sorted for delivery to storm victims.

Siegel's also been asking fellow real estate agents to join her in an effort, advertised on Facebook pages and blogs, to find vacant homes — for sale or rent — to help house storm evacuees.

"I have to tell you, it feels like a virus going around, this need to help," she said, speaking a mile a minute as she raced to get out of her house. "So many people are feeling it."

In ways big and small, ordinary people from storm-affected areas are seeking out opportunities to help. In terms of drama, these efforts don't rise to the level of the heroic rescues that have made TV newscasts — like the man who ventured into chest-deep waters to rescue a stranded cab driver. But they are a way, these people say, of giving something, if just a little, to those who, by mere chance and geography, suffered more than they did.

"It turns out, people really, really want to do something," said Lyn Pentecost of the Lower Eastside Girls Club, which serves some 150 low-income families and was thrilled to find supporters donating more than $15,000 in less than four hours Saturday, following a 7 a.m. email. "They just want to know how to do it."

A world away on the Upper East Side, where power was never lost, Kim Hartman, a mother of three, was one of those who found herself searching for ways to help.

"I looked at the kids and they were sitting around, doing nothing," she said. "I wanted to stop the inertia."

So she took two of her kids and a friend to a local food pantry, where they spent three hours preparing packages for the needy. It turned out there were too many volunteers on subsequent days, so this weekend, the family is making hundreds of packaged lunches at home and bringing them over.

"This makes it very real to my kids," said Hartman, who's also hosting four guests from areas without power. "You can look at the pictures, but I think you need to walk out the front door, to really feel the change that has happened in the city."

The efforts are being organized in a myriad of ways: On Facebook pages and Twitter feeds, community blogs, school email lists, or by word of mouth. They are supplementing the much larger-scale efforts by relief agencies like the American Red Cross and religious-affiliated organizations like the Southern Baptist Disaster Relief, the Catholic Charities of New York or the United Methodist Committee on Relief.

The smaller, community-based efforts tend to focus on more specific needs. And so, while the Red Cross encourages financial donations, rather than material goods, as the most effective way to help, Staten Islander Sean Sweeney's Facebook page is full of requests for work gloves, boys' shoes, a generator for a family in distress, or an immediate need for manpower on a certain street corner.

"Anyone looking to get dirty can meet me at 326 Seaver Avenue this morning," Sweeney, a former community board chairman in the hard-hit borough and also an amateur photographer, posted on Saturday. "Bring gloves and your Resolve and I don't mean carpet cleaner."

"I am looking for boys' clothes `n toys for 8 and 10 year old boys!!!" one woman wrote earlier. "Work gloves are needed," wrote another. "New — Used — Mismatched. It doesn't matter."

A few days ago on his page, Sweeney says, he asked if anyone could spare a generator for a man who was a quadriplegic and had no power. Within hours, he had not only a generator but someone to help him bring it over.

In Queens, where Siegel, the real estate agent, was packing food and supplies on Saturday, she was joined by fellow teammates who had all planned to run Sunday's marathon together. Mayor Michael Bloomberg had canceled the race the night before. So the team decided to meet anyway and keep an earlier plan to work on hurricane relief, followed by a brainstorming session for their next marathon, in Pennsylvania next week.

On the Upper West Side of Manhattan, where residents were relatively unaffected by Sandy, volunteer coordinator Shelly Fine found a similar spirit of resolve.

Fine, a former assistant schools superintendent who is trained in rescue efforts, put out an appeal for volunteers and found himself fielding hundreds of calls and emails. "People were very forthcoming, offering their time and their skills," he said. "They're saying, `What can I do?"'

Fine found that the best use of his own time was sitting in front of the computer and matching offers to needs — for example, two shelters closed and he had to redirect people to another. One shelter found it needed hygienic wipes to clean cots. Another needed trained medical personnel.

Elliot Zweig, 32, works at a nonprofit think tank, and found himself wanting to help out on Wednesday. He contacted Fine through a blog called the West Side Rag. Soon, he and his wife, a nurse practitioner, were staffing the medical room of a shelter on 84th Street. It was the first time Zweig had volunteered in a similar way since 9/11.

"I watched the TV news, saw all the tragedy and devastation, and I felt very spared — I was safe and comfortable," Zweig said. "We were the lucky ones, who could help."

This week, it's been hard to log onto a website of any organization — a school, a gym, even a store — and not see a reference to Sandy and efforts to help. The 92nd Street Y, in Manhattan, offered families free arts classes and gym time. PTA groups at schools discussed bake sales to raise money.

On a larger scale, NBC held a benefit concert Friday night, featuring Jon Bon Jovi, Bruce Springsteen and other stars, with donations going to the Red Cross. Barneys New York, the luxury store, was giving 10 percent of its proceeds from Sunday sales to the Red Cross.

Some recovery efforts involved not a group, but merely an individual seeking to help a neighbor. Julia Strom spent three nights — from 6 p.m. to 9 a.m. — caring for a woman in her 90s by candlelight. Doing so "was a privilege; it heightens and beautifies life," the 53-year-old Strom said.

Sometimes, agreed Pentecost, of the Lower Eastside Girls Club, it's the littlest things that count the most — what she called "small acts of great love."

Her group was planning to take the thousands of dollars raised this weekend and stuff a bunch of $20 bills into envelopes for families who need to pay that next cellphone bill. Or stock the refrigerator.

"People have to throw out everything in their fridges," she noted. "This is restock-the-fridge money."

"I understand the need for FEMA and the Red Cross and all the rest," she added. "But we're talking about no lines, no red tape. Just immediate help. These people have suffered enough."