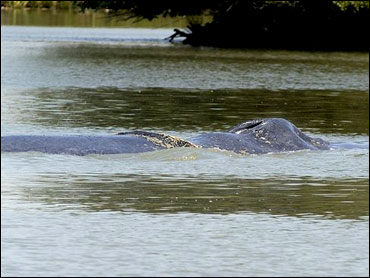 Whale rescuers boarded a fire boat Friday and sprayed powerful hoses into the water near two stranded whales in the latest attempt to herd the wounded humpbacks back to their ocean habitat.

The tactic, which has never been attempted before, seems as though it may eventually work. When the water started to splash into the river, the whales moved away — just as biologists had hoped, reports CBS News correspondent John Blackstone.

"We finally have a method that does seem to turn the whales," Frances Gulland, director of veterinary science at the Sausalito-based Marine Mammal Center, who is leading the rescue operation.

But one boat wasn't enough to force the whales down river. When crews aimed fire hoses at the water where the whales were swimming to try to shoo them along down the river, the whales simply dived down and swam under and around the boats.

On Friday morning, the wayward whales were spotted about a mile and-a-half north of a Sacramento River bridge, about 70 miles inland from the Pacific Ocean where they have been circling for several days, said Greg Hurner, a spokesman for the state Department of Fish and Game.

Scientists set out on a fire boat from a Coast Guard station. They planned to spray near the whales from above and below the water's surface and observe how they react.

"If the whales respond to the fire boat, then we might utilize it for operations next week," Hurner said.

The approach comes after failed attempts to lead them back to sea using the sounds of clanging pipes, feeding humpbacks and killer orcas. The whales also didn't respond to a small fleet of boats trying to herd them downstream.

The humpbacks apparently took a wrong turn during their annual migration to feeding grounds in the northern Pacific. They traveled 90 miles inland to the Port of Sacramento before turning around. They were making progress Monday until they reached the Rio Vista Bridge and began swimming in circles.

Officials gave the wayward pair a break from relocation efforts Thursday. The physical condition of the whales had not changed much, but their wounds — apparently sustained during a collision with a boat's propeller — continued to deteriorate.

"We continue to be concerned about the wounds on the whales," Hurner said.

The rescuers also are working on a plan to inject the whales with antibiotics to help their wounds heal. Scientists are still developing the drug and will likely use a syringe attached to a pole or a dartgun to administer it, Gulland said.

Rescuers planned to take a break from herding efforts over Memorial Day weekend, when they expect crowds of whale watchers to gather along the riverbanks to catch a glimpse of the humpbacks.

Authorities planned to maintain a 500-yard buffer zone around the whales to keep boats away. They asked boaters to slow down when they pass through the area where the mother and calf are swimming.

State wildlife officials said the public was welcome to try to see the whales but warned against citizen attempts to move the animals.

"We ask that nobody try to engage in any operation of their own," Hurner said. "We're very concerned about the public's safety and the whales' safety over the weekend."