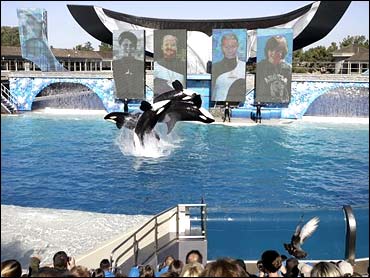 A two and a half ton orca that dragged a trainer underwater during a show at SeaWorld may have been put out by a spat with another whale, grumpy because of the weather or just irritable from a stomach ache, according to marine mammal experts.

"Some mornings they just wake up not as willing to do the show as others," said Ken Balcomb, director of the Center for Whale Research in Friday Harbor, Washington. "If the trainer doesn't recognize it's not a good day, this will happen."

The whale, Kasatka, was back in the water Thursday for a lunchtime performance that went off without a hitch. But the show was limited to tricks that did not involve trainers getting in the water.

Meanwhile, experts from other SeaWorld parks and marine centers converged in San Diego to review Wednesday's incident and figure out what set the whale off.

The trainer, Ken Peters, 39, underwent surgery Thursday on a broken bone in his foot but was otherwise in good spirits, said Mike Scarpuzzi, vice president of zoological operations at SeaWorld San Diego and a former killer-whale trainer.

Kasatka, a 30-year-old orca that is about 17 feet long and weighs well over 5,000 pounds, twice held Peters underwater for less than a minute each time during the finale of a show at Shamu Stadium.

The act called for the orca to leap out of the water so Peters could dive off her nose. Instead, as several hundred spectators watched, Kasatka grabbed Peters' foot in her mouth and dragged him toward the bottom of the 36-foot-deep tank.

When they came up, Peters tried to calm the animal by stroking its back, but it grabbed him and plunged down again. The whale finally released him and Peters was able to surface and swim away. He emerged from the tank with one leg of his wet suit torn.

Peters has 16 years of experience as a trainer, including 12 years in Shamu Stadium.

Scarpuzzi pointed out that the animals perform as many as eight times a day, 365 days a year, "so this, even though it can be expected because they are killer whales, it is definitely abnormal."

Killer whales are predators that were originally called whale-killers because they occasionally eat other whales and dolphins.

"In the wild, they're not dangerous to humans and there's no incidences of them attacking humans unprovoked," Balcomb said. But in captivity, "they're dangerous because they're big, and sometimes they're not happy with their situation."

Park spokesman Dave Koontz said a different whale went under with a trainer's foot in its mouth two or three weeks ago but obeyed commands to release the trainer and return to the side of the tank. The trainer was not injured.

The most serious attack at SeaWorld came in 1987, when a whale leaped onto a trainer as he rode a second whale during a stunt before a full house. The trainer was hospitalized with a broken pelvis, ribs and upper leg.

Kasatka made headlines in 2001 when she became the first killer whale to successfully give birth in captivity after being artificially inseminated.