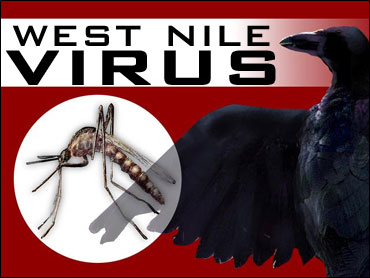 West Nile virus, which has killed 18 people along the East Coast since it surfaced in this country three years ago, will probably continue its westward march this summer, health officials warned Thursday.

And in Southern states, where balmy weather often stretches well into the fall, the mosquito-borne virus is moving closer to becoming a year-round threat, the Centers for Disease Control and Prevention said.

Mosquitoes spread West Nile from infected birds to humans, who can then develop deadly encephalitis, or swelling of the brain. Humans cannot pass the virus to one another.

West Nile was first detected in New York in 1999. Last summer was the most severe so far, with 66 human infections and nine deaths reported.

Sporadic infections have been detected as far west as Illinois, Arkansas and Louisiana, and health officials said migratory birds will probably carry the virus even farther west this season.

And transmission by birds makes it difficult for health officials to guess when and where the virus will show up next.

"It remains somewhat of an unpredictable virus," said CDC infectious-disease expert Dr. Stephen Ostroff. "There is no reason that the virus wouldn't continue to expand its geographic range within the United States."

No human cases have been identified so far in 2002.

The CDC urged people to report dead birds to health authorities and to protect themselves against mosquito bites by getting rid of standing water and wearing insect repellent and long sleeves.

West Nile cases have mostly been confined to the summer months, when mosquitoes thrive. But humans were infected as late as December last year in Georgia, and birds tested positive in February this year in Florida.

"It's basically indicating in some of these areas that the virus will set up a year-round transmission," Ostroff said.

The symptoms are similar to the flu, including fatigue and fever. There is no cure for the virus.