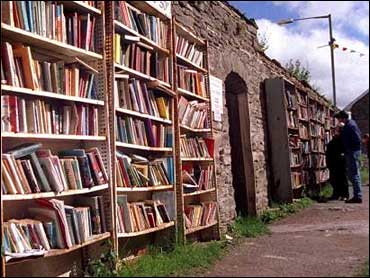 It's a rainy Saturday in May and the narrow streets of this tidy stone town on the banks of the River Wye are cluttered with people.

Hikers are heading to the surrounding hills of the Wye valley and bibliophiles are burrowing deep into dusty stacks at Hay's bookstores.

"There are more books per head of population in this town than in any other town in the world," says Richard Booth, who opened Hay's first bookstore more than 40 years ago. "Put them all together, we offer a better service than the British Library."

For book lovers, Hay is seductive. The shops range from dusty paperback caverns to specialists in children's books, poetry, art, travel and languages. Murder and Mayhem concentrates on thrillers, Boz books on Dickens.

For those tired of browsing, Hay has cozy pubs, good restaurants, historic inns and a ruined medieval castle perched in the middle of town.

Every year in late May and early June, the world's literary heavy-hitters descend on the town for the Hay Festival, Britain's leading book gathering.

Some 70,000 visitors will attend talks on everything from Italian cookery and the life of the prophet Mohammed to the sex lives of animals, U.S. foreign policy and Welsh poetry.

Most residents acknowledge - some grudgingly - that the town's renaissance is due to Booth, the self-styled "King of Hay." Booth is a firm believer in the power of books - the buying and selling, rather than the reading of them - to change the world.

An Oxford University graduate with family ties in the area, Booth opened a bookstore in the town's empty fire station in 1961, and expanded it into an empire.

"It's all down to Richard," says Derek Addyman, who runs three bookshops in Hay. "There had been no secondhand booksellers in Hay before he kicked it off."

Booth proved adept at attracting publicity. He moved into derelict Hay Castle and proclaimed himself king; on April Fool's Day 1977 he declared the town's independence from England and Wales, printed Hay passports and bank notes and offered noble titles for a small fee.

"I bent over backwards to get publicity," says Booth, who relishes both books and his status as bibliophile celebrity. "Hay was created out of an exotic cocktail of the 1970s, when Marianne Faithful used to come down frequently, for example."

A forceful character who lists his recreations in "Who's Who" as "creating a monarchy in Hay" and gardening, Booth has sometimes had a prickly relationship with the town.

For years he feuded with the founders of the Hay Festival, although he now gives the event his royal blessing, delivering a "King's Festival Message" on the opening day.

Booth's eccentricity seems to have rubbed off on the town, whose population is a mix of enterprising locals, idealists, entrepreneurs and lost souls. Paul Collins, an American who works for Booth, describes the town's hothouse atmosphere in the recently published "Sixpence House: Lost in a Town of Books."

Colin Stark, who has lived in Hay for nine years, is typical of those who have settled in Hay.

"It was an accident. I was running away from a divorce and I liked the place," says Stark, a former philosophy lecturer who sells books in Booth's Hay Castle Bookshop.

"It's full of life. I don't know of any other town of 1,500 people where on a wet Wednesday in February you meet people from all over the world."

Booth, 64, is ringmaster of a loose network of "book towns" of varying degrees of success around the world, from Fjaerland in Norway to Archer City, Texas, home of writer Larry McMurtry's "book ranch."

Now, Booth hopes to repeat the magic in Blaenavon, a wind-swept town 20 miles south of Hay whose large stone buildings are testament to its past prosperity, built on coal carved from the nearby Big Pit mine. The town, also home to a huge iron works, was declared a U.N. World Heritage Site in 2000, joining British landmarks such as Hadrian's Wall, Stonehenge and the Tower of London.

But its glories are firmly rooted in the past. The mine, which closed in 1980, is now a museum, where former miners lead visitors through dank underground tunnels to experience the life once led by the region's 250,000 miners.

Coal now employs fewer than 1,000 people in south Wales, and Blaenavon's dour main street is pocked with boarded-up shops. But next month, 10 bookstores will open, with dealers tempted by rock-bottom rents, free publicity and a startup supply of books from Booth and his business partner, American bookseller James Hanna.

"It will work," Booth says.

"There are four types of books - new, antiquarian, remaindered and secondhand. Only the secondhand has this huge potential, because every book in the world becomes secondhand."