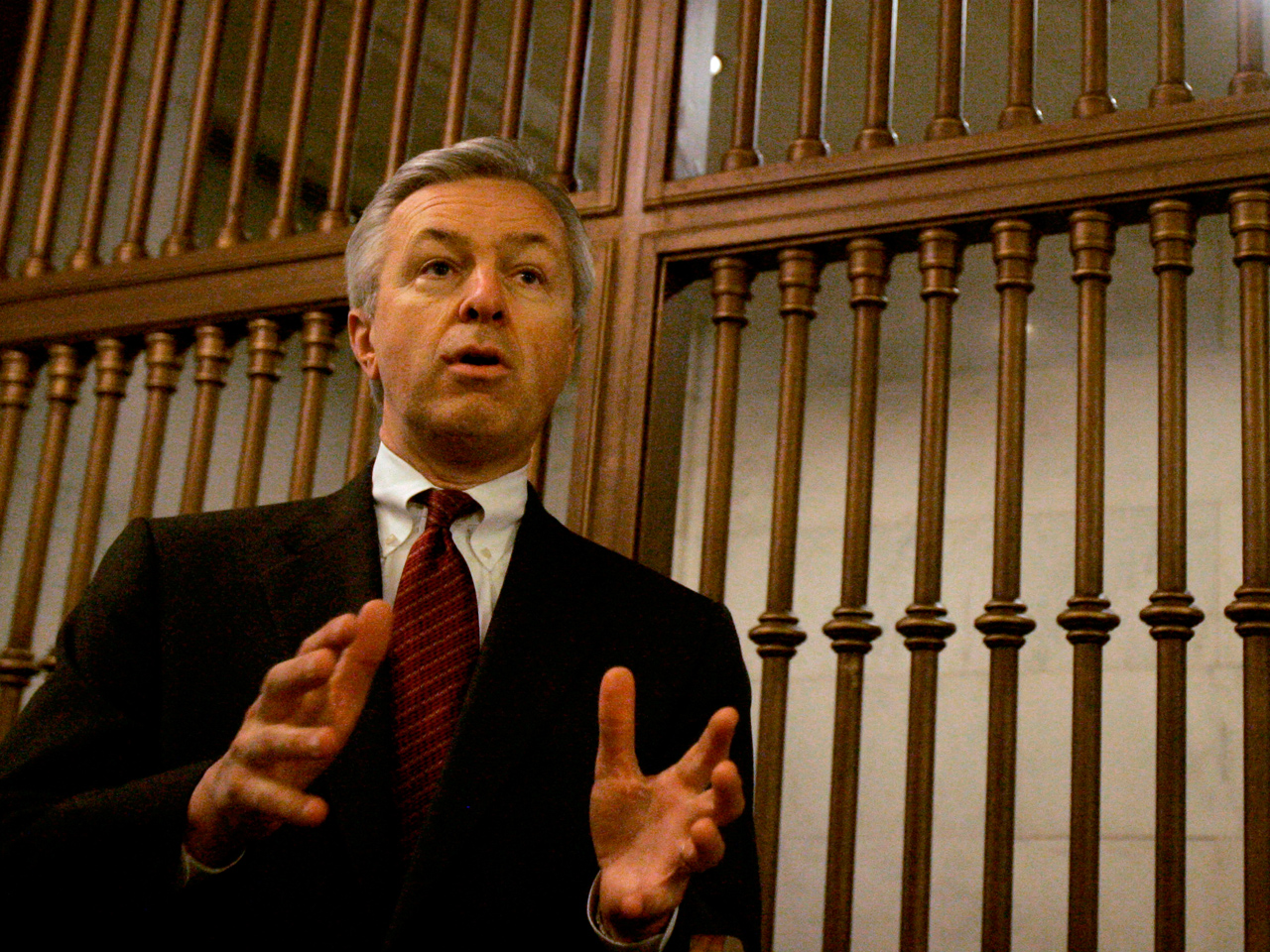 John Stumpf is a survivor.

He's a CEO who kept his job as peers fell after the 2008 financial crisis, a strategist who expanded his company while others shrank theirs, a personable banker at a time of great anger toward his industry.

Stumpf is the boss of Wells Fargo (WFC), the nation's fourth-largest bank by assets - and one of the few that emerged from the financial crisis with a reputation for responsible banking.

The bank likes to say its vanilla business model of making loans and taking deposits has kept it above the fray while exotic derivatives and other risky practices have bludgeoned rivals. Today, Wells controls a third of the U.S. mortgage market, giving it by far the biggest share of any bank.

The mortgage strategy has its own problems, though, including lawsuits over questionable lending. In October, for example, the Justice Department sued Wells, accusing it of misrepresenting the quality of thousands of mortgage loans that the Federal Housing Administration insured and that later defaulted.

San Francisco-based Wells was one of the largest banks in the country but relatively unknown outside the Western U.S. before 2008, when it scooped up teetering Wachovia in the depths of the financial crisis.

The bank has turned a profit every quarter since 2009, when the purchase was complete. Earnings have expanded while revenue has stayed steady.

Like other big banks, Wells Fargo's stock has had an impressive year, gaining about 20 percent. But unlike the others, it's close to its pre-crisis heights. The stock was around $35 when Stumpf took over in the summer of 2007. At $33 on Thursday morning, it was about 7 percent off that price.

Most of the other megabanks are trading at small fractions of where they were in that period. Wells Fargo is also the only one trading above its book value, essentially the underlying value of all its parts.

In an interview with The Associated Press, Stumpf, 59, talked about why he's fighting the government's lawsuit, why he's less than enthusiastic on the economy and when it's OK to ditch the suit and tie.

Questions and answers have been condensed and edited for clarity and length.

What's your prediction for the economy? Could we move into a reasonably strong economy in the next couple of years just naturally, because we've been in a downturn for so long?

Stumpf: I don't know that I subscribe to that. It takes more planning and more leadership. We've got $16 trillion of federal debt, we have deficits as far as the eye can see, 10,000 people retire every day in this country and are getting (extremely low interest rates) on their savings. Left to its own, it will look very much like what it's looked like so far.

So what do we do?

Stumpf: There's still too much uncertainty - tax policy, health care, entitlements, a whole bunch of other things. I would like to see the public sector and private sector get on the same page. Take something like housing. We have states that are passing new laws around housing that sometimes are in conflict with the national standards. What will happen to the mortgage interest deduction? We don't know these things. And when it's uncertain, the private sector feels it in a big way. We just published our quarterly Gallup/Wells Fargo small business survey, and we saw more pessimism than we've seen (in years), because what happens in Washington affects Main Street.

Washington is fighting over tax policy and government spending. Should taxes go up for the wealthiest people?

Stumpf: I'll speak as an individual. Whatever is asked of me as a taxpayer, I'm willing to do. I'm the luckiest guy on the planet, so I'm all about growing our way out of this situation.

The Justice Department recently accused your bank of mortgage fraud. What's your response?

Stumpf: We think they got that wrong. Our FHA lending activity and servicing, we've done it in good faith, we have met the requirements that were laid out. The proof was really in the results - our portfolio performs better than others. We have a number of defenses. This is one we're going to take on.

Some people on your board have what seem like close ties to your bank. Two have immediate relatives who work there, and not as tellers but as people who make nearly $300,000 or $800,000 a year. A board is supposed to be independent. How do you defend that? (Phil Quigley, a board member and the former lead director, has a son who works at Wells Fargo Securities. Cynthia Milligan, another board member, has a brother who works at the bank as a wealth management adviser.)

Stumpf: We have wonderful ethnic, geographic, gender and experiential diversity on our board. Five of our board members are persons of color, five are women, and they come to us with different disciplines and different geographies. In the case of Phil Quigley, he has reached his retirement age and he will not stand for re-election. His son works in one of our groups in southern California and he didn't even know his son had applied for a job until he got it. And I don't recall if Cynthia Milligan's brother is now retired or not, but those are the only two (board) members that I know that have family members (at the bank) and both of them enjoy very high re-election numbers. If you look at the SEC and New York Stock Exchange independence rules, they pass all of those. I never even hear it as an issue.

People hate bank fees. Bank of America just decided to postpone new fees on its checking accounts. Where do you see this going?

Stumpf: We try to be transparent in what we do. I think what really irritates customers is where they believe they got something at this price and find out there's some other language in there and they really paid this price.

What we want to provide for customers is a good, fair deal. We have 6,000 (branches), 12,218 ATM machines, 24/7 bankers, online, and all this stuff costs money. We give people access if they do enough business with us. If they choose not to do business with us but for one thing, we charge them ($7) a month for the access to that nationwide distribution. That's a bargain. Our customers understand that. We've had minimal issues in that area. Our customers have higher loyalty scores with us than we've ever had.

Stumpf: You started in the business as a repo guy, so you had to show up at people's houses and take back their cars, their washing machines or whatever else they could no longer make payments on. What did you learn from that?

When you make a bad loan, a lot of people suffer. Your shareholder suffers, customers suffer. People go into a loan wanting to make it work, and they want to pay their debts.

Stumpf: One time I was repo-ing a chain saw out on a farm north of the Twin Cities. I heard the chain saw, so I walked around the house and some guy was cutting wood. He said, `What do you want?' and I said, `I'm here for the chain saw,' and he picked up the chain saw in one hand and then a shotgun in the other, and he said, `Here, come and get it.' And I said, `Maybe I don't need that chain saw right now.'

You've been pretty outspoken against some of the new government regulations imposed on the banking industry.

Stumpf: I'm not against regulation. I like good, effective regulation. What I worry about are the unintended consequences of well-intended people who pass laws that make it harder to lend money, make it more difficult for consumers and small businesses and large businesses to get credit.

You said, for example, that you were worried about possible new rules on remittances, when bank customers send money to relatives in their home countries. Tell us about that. (The government is proposing rules that would require companies to give customers more detail about the expected fees and taxes, and to make sure the correct person picks up the money on the other end.)

Stumpf: That's just one small example. That's a small business. Wait until they opine on mortgages, which is a big business.

You were outspoken against the idea of a standalone Consumer Financial Protection Bureau when it was proposed. What do you think of the job they've done so far?

Stumpf: These are good people, and they've been asked to do an impossible job. I hope they get it right.

What do you think about their putting the complaints against your bank and others on the Internet?

Stumpf: You know, we talk to our customers every day. If that's the best way for them to make that information available, that's up to them.

Warren Buffett is your biggest shareholder. Tell us about that.

Stumpf: He reads everything. One time I talked to him on a Monday, we'd put out our 10-Q (a quarterly financial report) on a Friday, and he said he spent all day Saturday reading it cover to cover. I said, `Warren, you do that often?' He said, `Oh, I love Q's.' He was asking me about some esoteric asset - I was blown away.

Do you want to be treasury secretary?

Stumpf: I have a full-time job. I love leading Wells Fargo.

You've got almost 270,000 employees, and you've said you try to talk to one, unannounced, every day. How do you do that?

Stumpf: I see somebody in the elevator, I call somebody on their birthday, I see a sales report or I see a great save or I hear a story about one person who is handing out bottles of water after Hurricane Sandy, and I call them up and say, `Thank you,' and 'What are you hearing?', 'What are you thinking?' Or I might walk into one of our stores when I'm traveling and shake their hands.

Do you wear a suit? Because that might give you away.

Stumpf: Sometimes I do. If I'm in a mountain town, I don't. One time I did and somebody came out of the bathroom with their kid and said, 'Hey, Johnny, look, there's a bank examiner.'