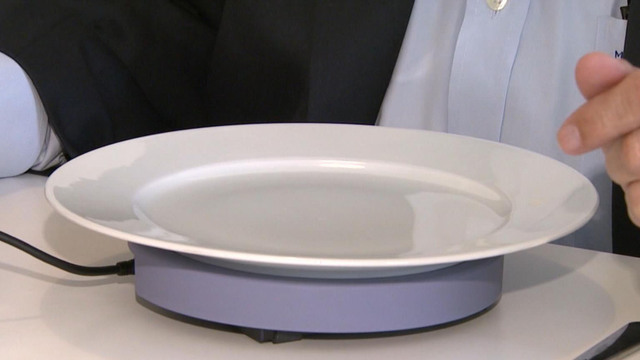 Dieting is not easy, but what if your utensils could help you reach your weight-loss goals?

A talking scale that tells you how much you should eat, a weight-loss watch and a fork that vibrates and flashes a red light if you eat too fast are some examples of tech inventions that can help you shed pounds.

"Place your plate on the scale," it directs. "Put food on the plate."

The scale tells you how much food to eat over how much time. If you eat too fast, it warns you, saying, "Please eat a little slower."

"I've asked it to shut up a few times," Correa joked.

The device, called the mandometer, works as part of the theory that eating more slowly leads to weight loss.

"It's about feeling full and by eating slower, you will feel full sooner," nutritionist Deborah Cardile said.

Another device called the Bite Counter counts each bite during a meal. A computer allows the user to set the count and read the results on their wrist.

Psychologist Eric Muth developed the device after his own struggle with weight gain. If you eat more than a pre-programmed number of bites, an alarm goes off.

"We showed that if we tracked bites, you could indeed slow a person's eating -- and that did reduce intake," Muth said.

Another device, called the HAPIfork, vibrates and flashes a red light if you take bites less than 10 seconds apart. A mobile app helps to keep track.

CBS 2 had some local diners try it out -- and most were surprised at what it revealed.

"It makes you stop and think," one diner said.

"I was like, oh, was I eating too fast?" James Hokkanen said.

From eating slower to smaller portions and taking fewer bites, studies show these strategies can help you lose weight. However, experts say the high-tech route comes with limits.

"It definitely can be of some value but it still does not help you decide what food choices to make or when to eat. Those two things are extremely important," nutritionist Nicollette Pace said.

Still, Correa said it worked for him and he's lost nearly 30 pounds in just three months.

Whether you use high-tech devices or not, experts say in the end, weight loss comes down to how much you eat and how much you exercise.