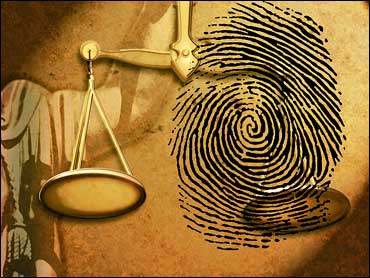 As anyone who's ever read a crime novel or watched a cop show knows, there's nothing like a fingerprint to convict the guilty and exonerate the innocent … except, that is, when it doesn't. Long the unquestioned standard of identification, fingerprinting is coming under fire, and some courts are taking notice. Erin Moriarty of 48 Hours has our Cover Story:

Fingerprints - they are a universal symbol of identity. The ridges which allow us to grasp objects form a complex mix of whorls, arches and loops, believed to be unique to each person. Not even identical twins have identical fingerprints.

Which is why fingerprint analysis plays a huge role in solving crimes.

Once a cop, now a criminology professor at the University of Maryland, Tom Mauriello says the best way to track down criminals is still the old fashioned way: dusting for prints.

"It's the most common physical evidence that we find- at a crime scene," Mauriello said. "'Cause when two objects touch each other they take on characteristics of each other. And there's always fingerprints everywhere."

Fingerprint analysis was first used in an American court to convict a killer in 1911.

Since then, as any fan of "CSI" knows, criminal investigation has become a lot more high-tech. After almost a century, fingerprint analysis remains a widely-accepted forensic tool.

But that may be about to change.

"Without question, fingerprint evidence is considered to be, by juries, actual evidence of guilt, incontrovertible evidence of guilt. And, unfortunately, the reality is far different than that," says attorney and forensic expert Patrick Kent.

Kent, who's with the Maryland Public Defender's Office, says that while DNA evidence is a science, fingerprint analysis is basically an art.

"Are you saying fingerprint evidence shouldn't be allowed?" Moriarty asked.

"My answer, unequivocally, is that it should not," Kent said.

And in a decision last fall that shocked lawyers across the country, a judge in Maryland agreed. She threw out the fingerprint evidence tying the defendant Brian Keith Rose to murder.

Glen Langenburg, a fingerprint examiner with the Minnesota State Crime lab, says the jury in that case was actually being denied very valuable evidence.

"I'm not saying that it is foolproof," Langenburg said, "and is that the standard, that in order to use evidence in court it must be perfect? I mean the irony is, eyewitness testimony gets in every time. I mean, no one ever challenges eyewitness testimony."

The judge's decision in the Rose case could jeopardize thousands of criminal investigations nationwide.

"She called fingerprint evidence 'a subjective, untested, unverifiable identification procedure.' How do you respond to that?" asked Tom Bush of the Federal Bureau of Investigation. "I don't believe there's evidence to support that type of decision."

Tom Bush runs the FBI's West Virginia complex which processes as many as 140 thousand fingerprints a day. He says the department has been using prints to catch criminals for more than 80 years, which means a lot of bad guys (and their fingers) have left a lasting impression, like Al Capone, Pretty Boy Floyd and George "Machine Gun" Kelly.

Today, with the automated fingerprint I.D. system which stores tens of millions of prints from criminal arrests and employment background checks, analysis can take just minutes. Police from around the country can contact the system and get a response in just hours.

And how reliable is this system?

"We believe our system to be in the high 98-percentile accurate," Bush said.

But if fingerprint analysis is so accurate, why did the Baltimore County judge in the Brian Rose case refuse to allow it as evidence? Because of what happened to another man in Portland, Oregon.

On May 6, 2004, FBI agents came to Mona Mayfield's home with a search warrant.

"They sat at the kitchen table and the gentleman opened up his briefcase and he said, 'This bag was found in the van, 20 minutes away from the Madrid Spain bombing,"' Mayfield said. "'And your husband's fingerprint was on it.'"

"It was surreal. It was just surreal. My first impression, 'No way. There's gotta be a mistake.'"

Just two months earlier, terrorists had bombed four commuter trains in Madrid, killing almost 200 people. An international investigation led to Brandon Mayfield, Mona's husband, an American lawyer who converted to Islam. Mayfield was arrested after a smudged partial print, found on a bag of detonators, was matched to his - not by one FBI examiner, but three.

"I honestly felt that I was being framed," Brandon Mayfield said, "because I hadn't been out of the country for ten years."

Mayfield, an Army veteran, had no criminal record and no ties to terrorist groups. His lawyer brought in an independent examiner with the hope of clearing his name.

That person, as well, told Mayfield, "It's your fingerprint."

"That was a very dark day for me, to say the least. I'd probably been in jail in lockdown for over two weeks. I was tired. I was just being worn thin."

Mayfield's family was in a quasi-lockdown as well. Mona said people were thinking she was married to a terrorist. "I didn't want to let my kids out of the house," she said. "I didn't want to send them to school. I was afraid for their safety."

Two weeks after Mayfield's arrest, Spanish investigators found the man to whom the fingerprint really belonged.

And if Spanish police hadn't found the real source of that print, where would Brandon Mayfield likely be today? According to Patrick Kent,"There's no question that Mr. Mayfield would be sentenced either to life or sentenced to death. No question."

It turns out a partial, distorted print, like the one the FBI had, often yields multiple potential matches. In fact, when the Madrid print was put into the government's automated system, 20 different prints with similarities came up, including Mayfield's. After the first FBI examiner mistakenly matched the print to Mayfield, the other two confirmed it.

The Bureau has since promised "procedural reforms," but Kent says he isn't buying it.

"The problem is, how many Mayfields are there?" he said. "If the best, by their admission, can make such a glaring error in a high-profile case when they knew the world was watching, what is happening in the counties, in the countryside, in areas where we don't, quote, 'have the best of the best?'"

But examiner Glen Langenburg believes this case is not the norm:

"I'm always concerned if an innocent person has to go to jail, of course. But I not concerned it's a rampant issue, that this is happening every single day, that people are [wrongly] going to jail on fingerprint evidence. I just don't believe it."

Brandon Mayfield was released and received a public apology from the FBI - along with a $2 million legal settlement.

"I was looking at much more severe consequences, and had no idea and felt totally helpless and had no idea how my family was gonna take care of themselves, or what's going to become of me," he said.

As for Brian Keith Rose in Maryland, he's still facing murder charges. The case has now been moved to federal court where the judge is expected to allow in the fingerprint evidence.

"Mr. Mayfield is not an aberration," Kent said. "Mr. Mayfield is a public face of many people in jail. It leaves me sleepless, quite candidly, because in fact it not that it just scares me to death, it's evidence that they use to put people to death."