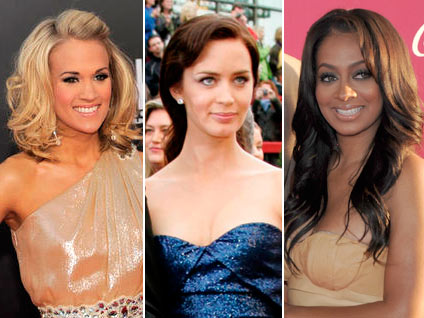 Underwood and Fisher exchanged vows under a tent in front of 250 guests at the Reynolds Plantation resort in Greensboro, Ga., in a ceremony that featured classical music and the couple's favorite Bible readings.

Blunt and Krasinski made their union official on Saturday in a private ceremony at the Villa D'este in Como, Italy. Krasinski's rep confirmed the wedding, according to published reports, adding that Blunt wore a custom cream chiffon sweetheart draped Marchesa gown with embroidered detail.

George Clooney, who has a villa in Italy, and girlfriend Elisabetta Canalis were reportedly among those in attendance. Clooney and Krasinski co-starred in the movie "Leatherheads"

In New York, stars from both Hollywood and the sports world came out for the wedding of Anthony and Vazquez.

Vazquez reportedly wore a Vera Wang gown as she exchanged vows with Anthony, while their 3-year-old son, Kiyan, served as the ring bearer. After the ceremony, guests were treated to a sit-down dinner and music from a live band. The five-tiered wedding cake was decorated with red flowers.

Actor Martin Lawrence also got married on Saturday at his home in Beverly Hills, Calif. He and his longtime girlfriend, Shamicka Gibbs, exchanged Christian vows in the backyard in front of 120 guests, which included Denzel Washington and Eddie Murphy.

And finally, a New York congressman had a world-famous officiant at his wedding on Saturday. Former President Bill Clinton presided over the wedding of Democatic Rep. Anthony Weiner to Huma Abedin, a longtime aid of Secretary of State Hillary Clinton, on Long Island.