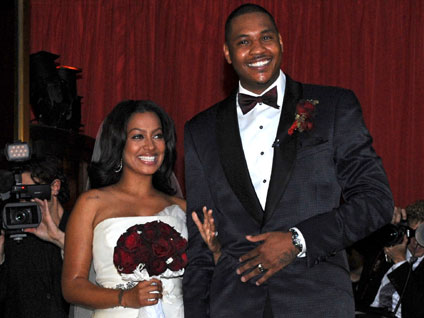 According to People magazine, Vazquez wore a Vera Wang gown as she exchanged vows with Anthony, while their 3-year-old son, Kiyan, served as the ring bearer.

"Best night of my entire life," Vazquez posted on her Twitter page early Sunday morning. "Thank u to all my family and friends who shared tonight with me. I love u. I'm on cloud 9 right now."

According to People, the Manhattan venue where the wedding took place featured towering marble columns and chandeliers, and was decorated using red tablecloths, centerpieces of red Ecuadorian roses, hundreds of candles and thousands of red roses hanging from the high ceiling.

After the ceremony, guests were treated to a sit-down dinner and music from a live band. The five-tiered wedding cake was decorated with red flowers.

According to the report, the couple, who became engaged in 2004, invited guests to their nuptials with invitations designed by Lehr & Black, which were red and gold and decorated with Swarovski crystals. It was delivered in a black box featuring their initials.

The affair was planned by event planner Mindy Weiss and was filmed for an upcoming VH1 reality show.