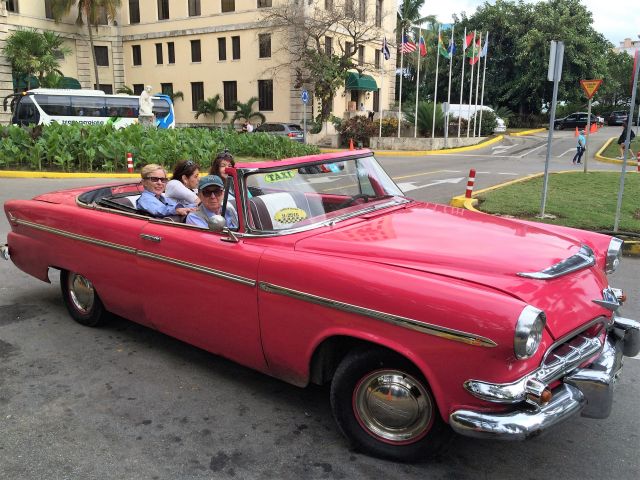 As President Barack Obama makes his historic visit Cuba, he's likely to see what any American traveler to Cuba quickly notices: the vintage U.S. cars. When I walked out of Havana's Jose Marti airport this January, I felt as if I had been transported right back to my teenage years in 1950s Indiana. A red-and-white 1956 Chevrolet glistened in the parking lot, flanked by a two-tone 1954 Buick and a blue 1954 Plymouth.

But it got even better when at last I spotted a version of the very first car I ever owned: A well-used 1949 Ford. Mine had been was painted black, but this one was bright blue (a Cuban innovation, not an original color).

The owners of these iconic beauties have made a virtue of necessity. New American cars have been off-limits under the U.S. trade embargo since 1960. In fact, until a relaxation of rules in 2013, Cubans were forbidden to buy any cars manufactured abroad. And only the most affluent Cubans can afford new vehicles. According to my unscientific survey of Havana streets, purchasers seem to go for the Korean brands Hyundai and Kia.

However shiny they may look from the outside, not all the American classics remain in original condition. When we took a taxi ride (pictured above) in a 1955 Dodge painted pink -- not an original color -- I detected that the engine didn't rumble like a 1950s V-8 should. I asked the driver if the car still had its original engine. "Oh no," he said proudly. "It has a Mercedes diesel."

Such substitutions have been necessary because the U.S. embargo bans replacement auto parts as well as new vehicles. That has also led to a lot of imaginative reengineering such as modifying springs made for train cars into replacement auto springs, which doesn't guarantee the smoothest ride.

You'll find the most beautifully maintained of the 1950s cars waiting outside the airport and hotels as taxis where they cater to the growing crowds of tourists. Battered-but-serviceable versions also serve as group taxis -- one of the major forms of transport for Cubans, who have few mass transit choices.

The American classics aren't the only old cars on Cuban road. Russian Lada models and Skodas from Czechoslovakia also came into the country during the decades when the Soviet Union was its major economic supporter. Not well-made to start with, they haven't aged well, either.

More in Behind The Wheel

European clunkers are represented, too. As a taxi outside a late-night performance by the Buena Vista Social Club, we took the only available choice, a dilapidated 1955 Fiat. It required three tries to start, had holes in the floor covered by cardboard and a blown-out muffler. But our cheerful young driver was so proud of his quality speakers booming out salsa that we couldn't help but enjoy the bumpy ride back to the hotel.

By now, the 1950s dreammobiles have come to be seen as a symbol of today's Cuba. They won't soon be replaced by gleaming American models. Although President Obama may have continued to normalize relations during his visit to Cuba, a Republican-dominated Congress is unlikely to lift the trade embargo anytime soon. And travel companies are in no hurry to see these popular tourist magnets vanish from the streets of Havana.

If you're an old car buff hoping that some of these Cuban classics will show up soon for sale, don't get too excited. The continuing embargo prevents Americans from buying one. Beyond that, experts say all the ingenious replacement parts keep these cars from qualifying as true collectibles.

On the other hand, perhaps some buyers might want to bid on them as mementoes. I once interviewed an elderly Cuban exile on another topic when he launched into a lyrical description of the 1954 Dodge he had left behind. If he had lived to see the opportunity and had enough money, I'm sure he would have been eager to bid on an old Cuban Dodge -- and the chance to relive his youth.