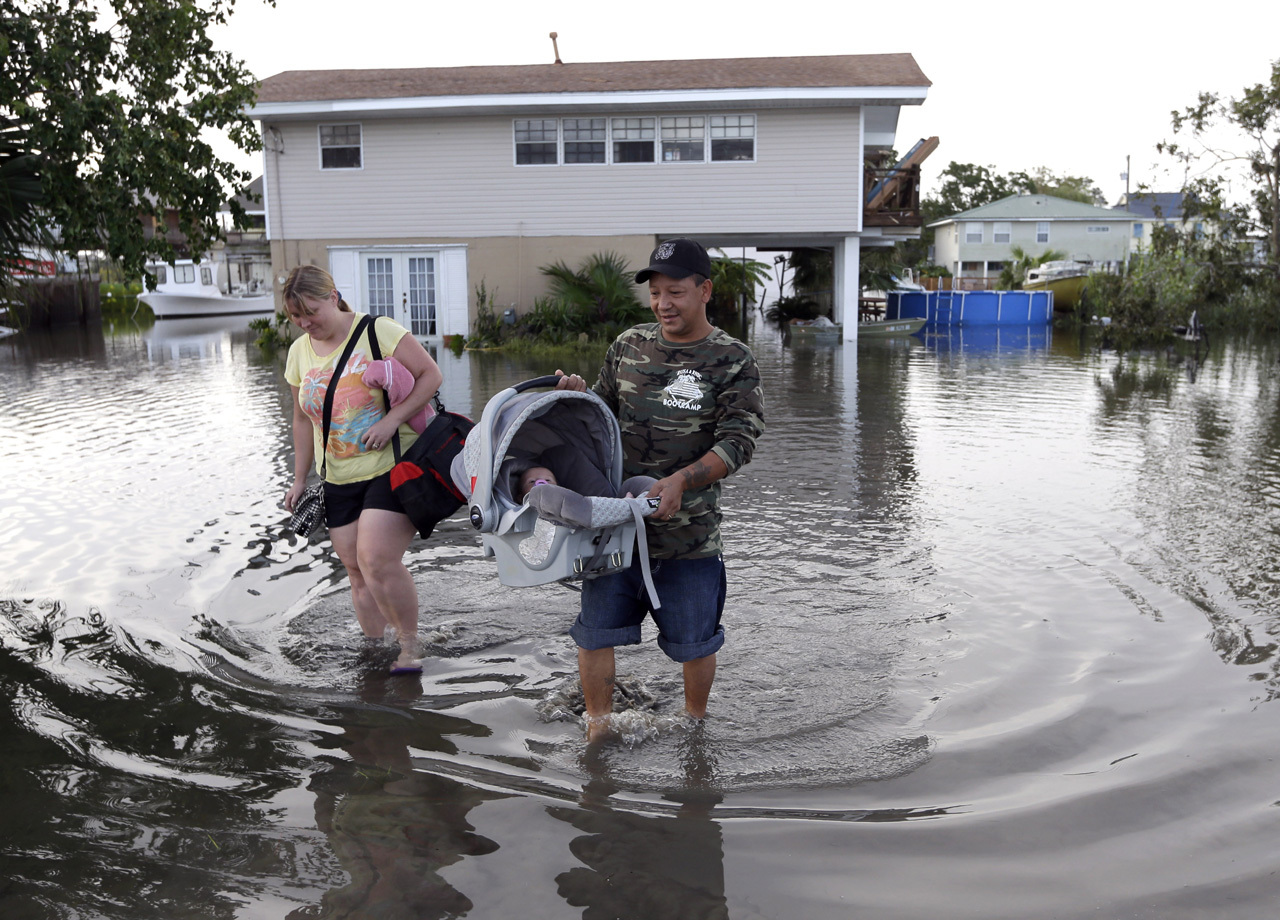 (AP) BELLE CHASE, La. - Floodwaters from Isaac receded, power came on and businesses opened Friday ahead of the holiday weekend, the beginning of what is certain to be a slow recovery for Louisiana.

Newly nominated Republican presidential candidate Mitt Romney visited flood-ravaged communities, and President Barack Obama said he would arrive Monday, appearances this part of the country is all too familiar with after Katrina and the Gulf oil spill.

Meanwhile, the leftovers from the storm pushed into the drought-stricken Midwest, knocking out power to thousands of people in Arkansas. At least seven people were killed in the storm in Mississippi and Louisiana.

In Lafitte, a fishing village south of New Orleans, Romney saw soaked homes, roads covered with brown water and debris-littered neighborhoods. The GOP-friendly community is outside of the federal levee system that spared New Orleans and it lies on an exposed stretch of land near the Gulf.

Sifting through the damage in Isaac's wake
Weakening Isaac hovers over water-logged La.
Isaac a mixed bag for drought-plagued states

Romney met along a highway with Louisiana Gov. Bobby Jindal, and they talked about challenges facing the stricken area, which relies on fishing for its livelihood. He also spoke to town officials and emergency workers.

"I'm here to learn and obviously to draw some attention to what's going on here," Romney told the governor. "So that people around the country know that people down here need help."

At one point, Romney and Jindal talked to a man in waders and a straw hat holding a handwritten, neon- yellow "Mitt Is Our Man" sign. The man complained about the area's lack of protection from flooding.

The town is located just outside a region that is protected by levees and other flood protection measures built after Hurricane Katrina battered New Orleans in 2005. The Army Corps of Engineers spent about $13 billion on the system.

Richard Riley rode out the storm in his home. Even though the water was receding Friday, he decided it was time to leave. He walked about a mile and found rescuers, who took him to family members.

Riley, a Republican, said he favored building new flood protection for the area, especially after Isaac brought in a surprising amount of water. He said he wanted Obama to help make that happen.

"He needs to see the devastation and allocate the money that's needed to build new levees or do whatever is needed to protect us," Riley said.

Crown Point, Lafitte and other nearby settlements that jut inland from the Gulf are accustomed to high water driven by hurricanes. But Isaac, a relatively weak storm by the standards of Betsy and Katrina, pushed in much more water than expected when it stalled after making landfall.

To the east, officials pumped and released water from a reservoir, easing the pressure behind an Isaac-stressed dam in Mississippi on the Louisiana border. The threat for the earthen dam on Lake Tangipahoa prompted evacuations in small towns and rural areas.

In New Orleans, at the Magnolia Discount Gas Station in the Carrollton neighborhood, employee Gadeaon Fentessa said up to 50 drivers an hour were pulling in, hopeful they could pump. He had the gas, but no power. Stations that did have power to pump had long lines.

There were other signs of life getting back to some sense of normalcy. The Mississippi River opened to limited traffic, the French Quarter rekindled its lively spirit and restaurants reopened.

Isaac dumped as much as 16 inches of rain in some areas, and about 500 people had to be rescued by boat or high-water vehicles. More than 5,000 people were still staying in shelters.

The remainder of the storm was still a powerful system carrying rain and the threat of flash flooding as it headed across Arkansas into Missouri and then up the Ohio River valley over the weekend, the National Weather Service said.

Oleg Shneper, manager of the Extended Stay America hotel in the Cincinnati suburb of Blue Ash, said occupancy was down about 10 percent already.

His hotel usually gets business travelers and a lot of people visiting nearby Kings Island amusement park in Mason.

"People have called to say they can't get here because the rain is keeping them from getting out of airports," he said. "We're also definitely not seeing as much family traffic."

Farther south, the storm victims included a man and a woman discovered late Thursday in a home in the hard-hit town of Braithwaite, south of New Orleans; a man killed in a restaurant fire; two men killed in separate car accidents, a woman whose car was hit by a tree and a man who fell from a tree.

More than 15,000 utility workers began restoring power to customers in Louisiana and Mississippi, but officials said it would be a couple of days before power was fully restored.

Crews intentionally breached a levee that was strained by Isaac's floodwaters in southeast Louisiana's Plaquemines Parish, which is outside the federal levee system. Parish President Billy Nungesser said the work was slow-going. Workers were only able to reach one spot, he said, and 10 to 12 cuts were planned. The levee is cut as the tide goes out, he said, then patched while the tide comes back.

In Mississippi's Bay St. Louis, Allen Barrilleaux, spent Friday morning draining water from the engine of his flooded truck not far from a river.

He had planned to ride out the storm with his wife, a friend, and 5-week-old son in their house, which is on stilts, but called for help Wednesday when the water came closer and large pine trees from a nearby mill swirled in the water. They were evacuated by boat.

Watching for ant beds as he walked around his green Chevy, Barrilleaux said hurricanes are part of life here, but disasters can hit anywhere.

"Life's cruel," Barrilleaux said, gripping a wrench with a greasy hand. Then he smiled.

"We're like that big old ant hill and a guy with a lawnmower just keeps mowing us down."