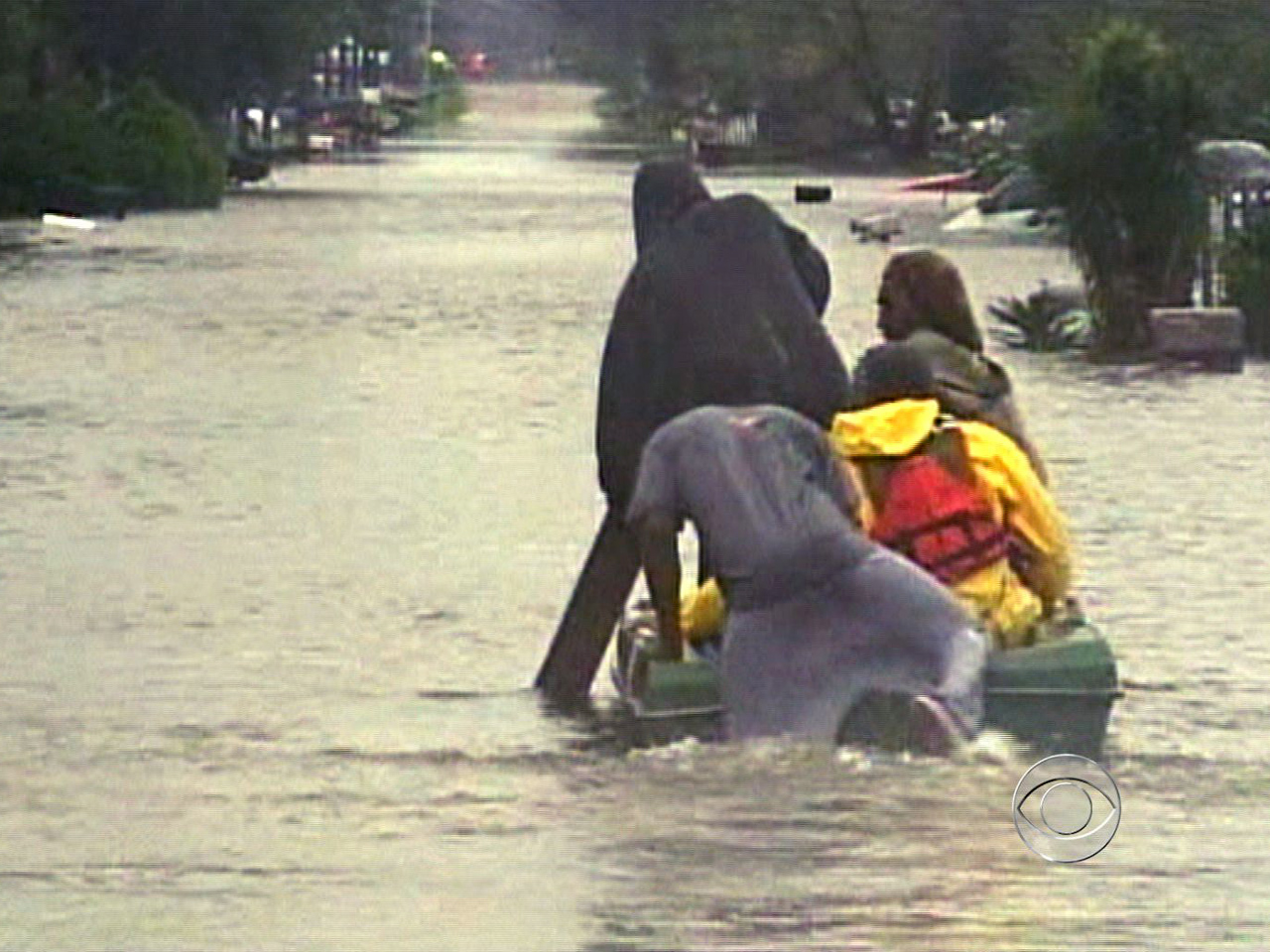 (CBS/AP) NEW ORLEANS - Isaac hovered over Louisiana for a third day Thursday, shedding more than a foot of additional rain that forced authorities to hurriedly evacuate areas ahead of the storm and rescue hundreds of people who could not escape as the rapidly rising waters swallowed entire neighborhoods.

The huge spiral weather system weakened to a tropical depression as it crawled inland, but it caught many places off guard by following a meandering, unpredictable path. The storm's excruciatingly slow movement meant that Isaac practically parked over low-lying towns and threw off great sheets of water for hours.

A chief investigator from the coroner's office in the hard-hit Plaquemines Parish confirmed to CBS News on Thursday that two bodies - a man and woman in their 40s - were found in a home in the town of Braithwaite. That brings the storm-related death toll in the region to at least four.

As of 9 p.m. Eastern, Isaac was moving at north-northwest 10 mph with maximum sustained winds of 30 mph, according to NOAA. A tornado watch was in effect for central and southern Mississippi and parts of southeast Louisiana, and flood warnings were still in place for parts of those states, and extending up in to Arkansas as the storm churned northward.

"I was blindsided. Nobody expected this," said Richard Musatchia, who fled his water-filled home in LaPlace, northwest of New Orleans.

Inside the fortified levees that protected New Orleans, bursts of sunshine streamed through the thick clouds, and life began to return to normal. But beyond the city, people got their first good look at Isaac's damage: Hundreds of homes were underwater. Half the state was without power at the one point. Thousands were staying at shelters.

And the damage may not be done. Even more rain was expected in Louisiana before the storm finally drifts into Arkansas and Missouri.

Isaac dumped as much as 16 inches in some areas, and about 500 people had to be rescued by boat or high-water vehicles. At least two deaths were reported.

Five feet of water poured into Musatchia's home before a neighbor passed by with a boat and evacuated him and his 6-year-old boxer, Renny.

He piled two suitcases, a backpack and a few smaller bags onto the boat and said that was all he had left. He abandoned a brand-new Cadillac and a Harley-Davidson.

"People have their generators, because they thought the power would go out, but no one expected" so much water, Musatchia said.

Other evacuees were picked up by National Guard vehicles, school buses and pickup trucks.

Daphine and David Newman fled their newly decorated home with two trash bags of clothing. They have lived in their subdivision since 1992 and never had water in their home from previous storms, not even Hurricane Katrina.

The comparison was common since Isaac hit on the seventh anniversary of the devastating 2005 storm, though the differences were stark.

Katrina was more powerful, coming ashore as a Category 3 storm. Isaac was a Category 1 at its peak. Katrina barreled into the state and quickly moved through. Isaac creeped across the landscape at less than 10 mph and wobbled constantly.

David Newman was frustrated that the government spent billions of dollars reinforcing New Orleans levees after Katrina, only to see the water inundating surrounding regions.

"The water's got to go somewhere," he said. "It's going to find the weakest link."

The sudden call for evacuations so long after the storm made landfall provoked a debate about whether anyone was to blame.

"The risk that a public official has is, people say, `Aw, it's a Category 1 storm, and you guys are out there calling for mandatory evacuations,"' Roberts said.

Hundreds of people in lower Jefferson chose to ride out the storm -- and many of them had to be rescued, he said.

Eric Blake, a specialist at the hurricane center, said that although Isaac's cone shifted west as it zigzagged toward the Gulf Coast, forecasters accurately predicted its path, intensity and rainfall. He did say the storm came ashore somewhat slower than anticipated.

Blake cautioned against using Katrina as a benchmark for flooding during other storms.

"Every hurricane is different," Blake said. "If you're trying to use the last hurricane to gauge your storm surge risk, it's very dangerous."

Along the shores of Lake Ponchartrain near New Orleans, officials sent scores of buses and dozens of high-water vehicles to help evacuate about 3,000 people as floodwaters lapped against houses and stranded cars.

The water rose waist-high in some neighborhoods, and the Louisiana National Guard worked with sheriff's deputies to rescue people stuck in their homes.

In LaPlace, a Coast Guard helicopter plucked a couple and their dogs from a home after storm surge gushed into their neighborhood and washed many houses away.

"They used a flashlight inside the house as a signaling device, which made all the difference in locating them effectively," Lt. Cmdr. Jorge Porto said.

Crews intentionally breached a levee that was strained by Isaac's floodwaters in southeast Louisiana's Plaquemines Parish, which is outside the federal levee system. At the same time, water at a dam farther north in Mississippi was released in an effort to prevent flooding there.

Since the storm arrived in the U.S., the first two fatalities were a tow truck driver hit by a tree that fell on his vehicle in Picayune, Miss., and a man who fell from a tree while helping friends move a vehicle. Deputies did not know why he climbed the tree.

Isaac "has reinforced for us once again just how vulnerable these critical areas are," said Louisiana Sen. Mary Landrieu. "We must re-engage the Corps of Engineers on this."

More than 900,000 homes and businesses around the state -- about 47 percent of all customers -- were without power Thursday. Utility company Entergy said that included about 157,000 in New Orleans.

In Mississippi, several coastal communities struggled with all the extra water, including Pascagoula, where a large portion of the city flooded and water blocked downtown intersections.

High water also prevented more than 800 people from returning to their homes in Bay St. Louis, a small town that lost most of its business district to Katrina's storm surge.

Even though Isaac was weaker, Mayor Les Fillingame said, "every storm is somebody's Katrina, regardless of the intensity."