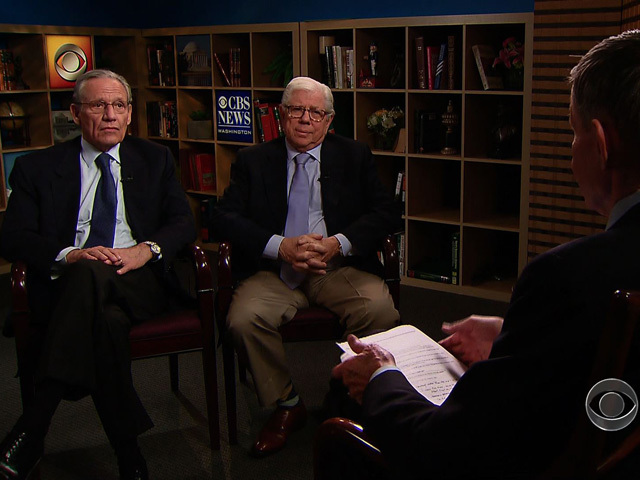 (CBS News)WASHINGTON - Forty years ago next Monday, The Washington Post printed its first story on what would become the biggest political scandal in U.S. history: Watergate. Now the two reporters who led the paper's investigation -- Bob Woodward and Carl Bernstein -- say there was a lot more to it than we knew then.

It didn't start with the 1972 break-in at the Democratic headquarters in the Watergate building. According to Woodward and Bernstein, it was part of a pervasive pattern of lawbreaking all through the Nixon administration.

"Illegal plans, illegal burglaries," said Bernstein. "Really, the White House became a kind of criminal enterprise by the end of his presidency to a remarkable extent, that I think we didn't understand at the time."

Woodward and Bernstein tracked down and pieced together their narrative of cover-ups, payoffs and covert operations -- much of it later confirmed in the president's own words caught on his White House taping system.

On the tapes, they found Nixon, as early as 1971, talking about stealing evidence to blackmail former President Lyndon Johnson. Nixon believed there were documents in the safe of a Washington think tank, proving that Johnson halted the bombing of Hanoi for political reasons.

"You know, I mean, I want it implemented on a thievery basis," Nixon said on a recording. "G**damn it, get in and get those files. Blow the safe and get it."

The reporters were asked given the state of politics today -- the standoff between the two parties and the inability to compromise -- why should anybody conclude that the idea that 'I have to win and you have to lose' is any different?

"The partisan hostility the gridlock that we experience today is indeed -- the acrimony runs very deep," said Woodward. "But I have not seen any evidence that somebody has hired a burglary team or gone out to wiretap."

Were there lessons learned from the Watergate scandal?

"I think there's an increasing concentration of power in the presidency, so it needs to be watched really carefully," Woodward said. "That is the ultimate lesson: watch concentrations of power. How are we doing in the media? Okay, but probably not good enough."

"Best thing I've ever heard was from Richard Nixon's attorney general," said Bernstein, "who later went to jail [in] Watergate, and he said, 'Watch what we do and not what we say.' That pretty much tells us what we need to do. It's not that complicated."

Richard Nixon spent the last 20 years of his life trying to minimize the circumstances that led to his resignation. Woodward and Bernstein believe in the end, the biggest tragedy was that Nixon was his own worst enemy.