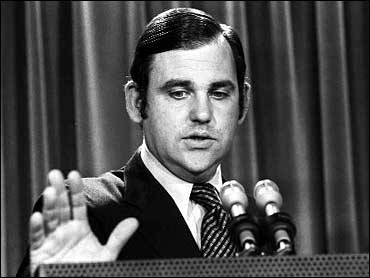 Ron Ziegler, the former press secretary to President Nixon who famously called the Watergate break-in a "third-rate burglary," died Monday of a heart attack, his wife said. He was 63.

Ziegler died at his home in Coronado, a suburb of San Diego, his wife, Nancy, told The Associated Press. "Certain elements may try to stretch this beyond what it is," Ziegler said of the June 17, 1972, burglary of the Democratic National Committee headquarters that would eventually lead to Nixon's resignation.

As Washington Post reporters Bob Woodward and Carl Bernstein tied the scandal to top officials in the Nixon administration, Ziegler routinely dismissed their reports as inaccurate. But the press secretary publicly apologized to them and their newspaper the day after the April 30, 1973, resignations of White House counsel John Dean and Nixon aides John Ehrlichman and H.R. Haldeman.

"I would apologize to the Post, and I would apologize to Mr. Woodward and Mr. Bernstein. ... We would all have to say that mistakes were made in terms of comments. I was overenthusiastic in my comments about the Post, particularly if you look at them in the context of developments that have taken place," he said at the time. "When we are wrong, we are wrong, as we were in that case."

Dean, who helped expose the scandal, said in an e-book published last year on Salon.com that Ziegler, despite his complaints about Woodward and Bernstein's reporting, was one of four people who may have been Deep Throat, the mysterious, chain-smoking source who gave Woodward crucial information in secret late-night meetings.

Woodward has said he will not reveal Deep Throat's identity until that person's death. As recently as last year, he said Deep Throat was still alive.

As spokesman for an administration that was falling apart under the weight of the scandal that drove Nixon from office, Ziegler was often unpopular with the public and the press in the early 1970s. His friends indicated he was tarnished unfairly because of his loyalty to his boss, Nixon.

"Deep down he was a wonderful person," Gerald Warren, a former deputy press secretary under Presidents Nixon and Ford said Monday night. "I think he was placed in an awkward position as a young man. ... It wasn't easy for him, but he did his best and he was very loyal.

"I don't think he ever showed the great promise that he had," Warren said. "I wish that he had been able to tell his story to the world."

Ziegler, who first worked with Nixon as a press aide on his unsuccessful campaign for California governor in 1963, stayed with the politician through fights with reporters — and even his boss.

Nixon bristled when he saw Ziegler helping the news media too much. During one visit to New Orleans, he shoved Ziegler and snapped, "I don't want any press with me, and you take care of it."

Ronald Louis Ziegler was born May 12, 1939, in Covington, Ky., and, like several members of the Nixon administration, was educated at the University of Southern California, which later awarded him an honorary doctorate.

He worked for the J. Walter Thompson advertising agency for several years in the 1960s before joining Nixon's California gubernatorial campaign.

After Nixon became president in 1969 he became his press secretary, holding that title until 1974 when he was named an assistant to the president.

After leaving government service, he held a number of executive positions with private enterprise, most recently as chief executive of the National Association of Chain Drug Stores from 1987. He retired in 1998.