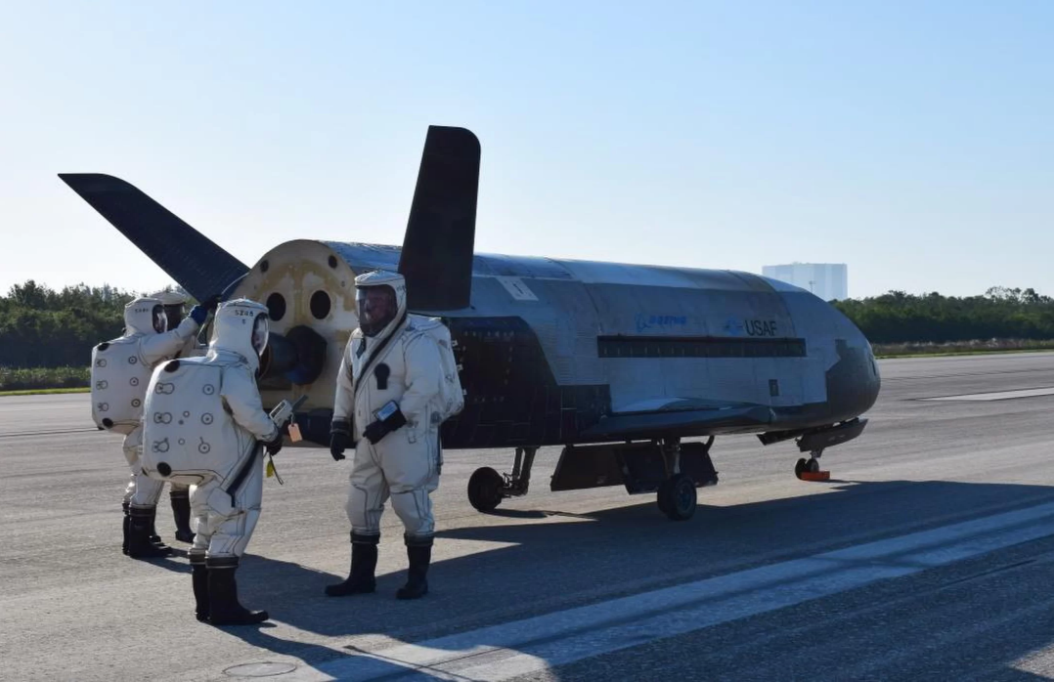 Two generations of reusable space planes came face to face — or nose to tail, rather — over the weekend.

As the X-37B zoomed down the tarmac at KSC's Shuttle Landing Facility (SLF), it cruised past what appeared to be a NASA space shuttle. The juxtaposition was jarring for several reasons. First, the pairing shows just how small the X-37B is; it looks a toy next to the giant shuttle. (Indeed, two X-37B vehicles could fit inside the space shuttle's payload bay.) [The X-37B's Fourth Mystery Mission in Photos]

And why is a space shuttle parked outside at the SLF? NASA's shuttle program ended in July 2011, and all three surviving space-flown orbiters are on display in museums around the country. Endeavour is on display at the California Science Center in Los Angeles, Discovery is at the National Air and Space Museum in the Washington, D.C., area and Atlantis is at the KSC Visitor Complex (located inside in a dazzling museum display).

The shuttle out on the SLF, it turns out, is a full-size, wood-and-plastic model called Inspiration. It was originally built in 1972 by Rockwell International (then known as North American Rockwell), to support the company's ultimately successful bid to build the real orbiters for NASA.

For more than 20 years, Inspiration had been parked outside the U.S. Astronaut Hall of Fame in Titusville, Florida, just west of KSC. But in January 2016, the mockup's new owners, LVX System, moved it to a nearby work yard. Then, in April of that year, Inspiration was rolled out to the SLF, where workers continue to refurbish the vehicle.

Eventually, Inspiration will travel by barge along America's waterways, allowing people around the country to see a full-size space shuttle (or a model of one, at least), LVX System representatives have said.

The Air Force is known to possess two X-37B vehicles, each of which was built by Boeing. The 29-foot-long space planes launch vertically and land horizontally, just like the space shuttle used to do.

All four OTV flights launched from Cape Canaveral Air Force Station, which is next door to KSC. The first three landed at Vandenberg Air Force Base in California; OTV-4 was the first to come down at the SLF, which, before Sunday, hadn't seen a touchdown since the July 2011 landing of the space shuttle Atlantis.

It's not clear what the X-37B is doing while it circles Earth; most of the vehicle's payloads and activities are classified. But Air Force officials have said that the X-37B program's main goals involve testing technologies for future spacecraft and reusable spaceflight systems, and taking experiments to space and returning them to Earth.