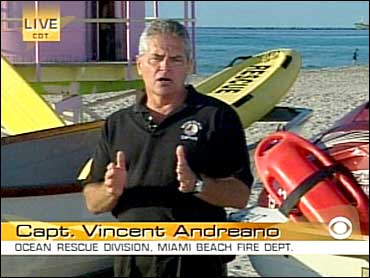 Over the past few weeks, strong winds causing rip currents in the waters off Miami Beach have claimed the lives of several beachgoers, and left dozens more in need of rescue.

Lifeguards are cautioning swimmers to be aware of the dangers of rip currents. So if you are headed for the beach this Memorial Day weekend, Capt. Vincent Andreano, with the Ocean Rescue division of the Miami Beach Fire Department, tells The Early Show co-anchor Rene Syler rip tides are not easy for the average swimmer to recognize but the trained eye can pick them up right away.

Andreano says, "The advice would be, if you're not familiar with them, to ask the lifeguards what the water conditions are, where the rip currents are, if any. That's their job. They love to tell you the story because they would rather tell you before you go in than have to deal with the issues later."

According to the National Oceanic and Atmospheric Association, NOAA, rip currents are powerful, channeled currents of water flowing away from shore.

Andreano explains, "As the waves come in, the water has to exit and go back out to sea. It picks the weakest point in the sand bar and that forms a channel. This channel could be from 25 yards to 100 yards wide. If you get in there, and if you are not a strong swimmer, you could be sucked out probably 100 yards."

Rip currents can occur at any beach with breaking waves, including the Great Lakes.

Andreano notes rip tides are different from an undertow. In an undertow, he explains there is a steep decline in the topography of the shoreline and in this drop-off, the water turns under. "The turning under is what people have a difficult time with. It's not being sucked out, but being turned under."

NOAA says on its Web site, "Eighty percent of surf-beach rescues are attributed to rip currents, and more than 100 people die annually from drowning when they are unable to escape a rip current."

The United States Lifesaving Association, USLA, has calculated the chance that a person will drown while attending a beach protected by USLA affiliated lifeguards at 1 in 18 million. But if you are caught in a rip current at an unguarded beach, how you respond could make the difference between life and death.

Here are a few safety tips: