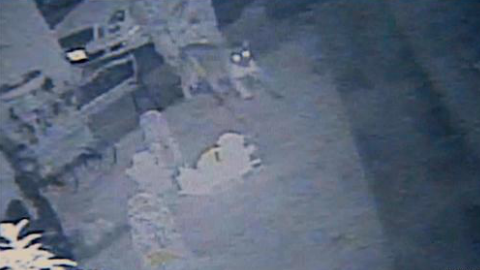 The home-surveillance video shows the 100-pound mountain lion prowling the backyard of the home, located on Hollywood Way, east of the 5-Freeway, at evening. At first, only a pair of glowing eyes are visible, before the lion walks into frame.

Homeowner Saro Tomasian says that the family’s boxer, Rocky, has reportedly been missing since Friday. The dog’s disappearance is what initially prompted Tomasian to take a look at the surveillance footage.

“My father said the dog is not here, he’s not on sight,” Tomasian said. “I definitely think the dog was taken by the mountain lion.”

Animal Service officer Gregory Randall inspected the backyard on Saturday and found paw prints next to a point in the fence over which he suspects the lion escaped. He says that, while dogs and humans are not typical mountain lion prey, it is possible the mountain lion attacked Rocky and carried him into the nearby canyon.

“Mountain lions are ambush predators,” Randall said. “They usually jump down from on top.”

Officer Randall says that he did not see any specific evidence of an attack near the home.

Experts advise residents, especially those who live near canyons, that if you see a mountain lion, wave your arms and make an abundance of noise.