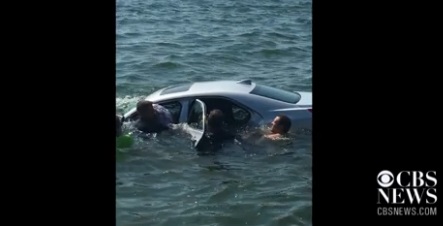 DETROIT -- A driver in Michigan was rescued after his car went into Lake St. Clair on Monday in Grosse Pointe Farms, and began sinking, CBS Detroit reported.

According to authorities, the 65-year-old man lost control of the car and drove over the median, launching the car into the water.

The dramatic rescue was caught on camera.

Grosse Pointe Farms Public Safety Officer Michael Scott said that when officers arrived, about 20 to 30 people were standing around, some of them shooting video on their phones.

However, he said, a couple of Good Samaritans -- who were in the area doing landscaping work -- had entered the water to help the man who was trapped inside his car.

"The landscapers were using a rock and weren't really getting any good hits on it, so I retrieved an ax from my vehicle, and Keith Colombo got his baton, and that's how were were able to get access the window and get through," Scott said.

Lt. Andrew Rodgers said the group was able to pull the man out before the car sank underwater -- but he was unresponsive.

Police believe the driver suffered from some type of medical emergency which led to the incident.

The driver was taken by EMS to a local hospital for treatment where his condition was not immediately known. His name was not released.

Eastbound Lake Shore Road will remain closed in the area as an accident investigation continues.