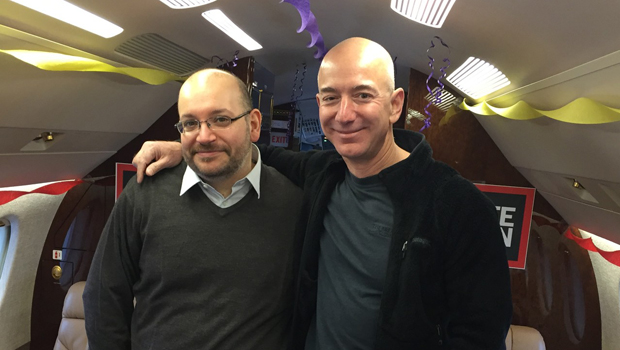 WASHINGTON -- The Washington Post reporter who was recently freed after spending 18 months in an Iranian prison is back in the U.S.

Jason Rezaian flew home Friday on the private jet of Amazon CEO Jeff Bezos, who owns the Post, according to the newspaper.

Bezos personally flew out to U.S. military's Landstuhl Regional Medical Center in Germany where Rezaian was staying with his family after leaving Iran on Sunday.

"I am overjoyed to be reconnecting with my family," Rezaian said in a statement Friday. "I am feeling well and plan to relax and enjoy home-cooked meals, sports and movies with them over the next few days and weeks."

Rezaian was freed Saturday along with four other Americans, including former Marine Amir Hekmati and pastor Saeed Abedini, in a landmark prisoner swap.

The trio flew to Germany by way of Switzerland on Sunday. Hekmati and Abedini returned to the U.S. separately on Thursday.

In exchange, the U.S. pardoned or dropped charges against seven Iranian citizens accused of sanctions violations, and gave up on extradition requests for 14 additional people.

Another American, researcher Matthew Trevithick, was permitted to leave Iran day earlier while another who was freed from prison opted to stay in Iran.

Rezaian said Wednesday that he looked forward to resuming his work "writing the U.S.-Iran story at some point."