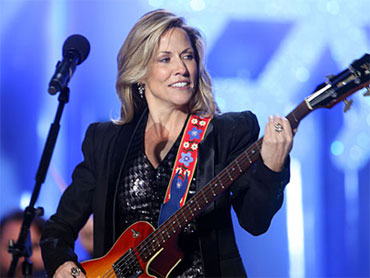 With all the technological advances in workout wear recently, there are a lots of great-looking fitness clothes that will keep you warm in the cold winter weather, without being bulky, and can keep you plugged in. It's hardly just about staying toasty and dry anymore.

She says the biggest trend this year is this idea if providing extreme warmth and water resistance, without bulk. In the past few years, we were seeing a lot of puffy down coats, but they're not particularly flattering. Now, with synthetic ways to insulate and keep you warm, you can get a sleek look and better performance while retaining your body's heat.

The big mini-trend we're seeing is clothes combining with technology, particularly Bluetooth technology. You can practically run a small country from your jacket because there's so much stuff built into it.

Items to consider include:

R.E.D. Audex All-Weather Jacket with Wireless Technology: You never have to leave your jacket. You could put your iPod or MP3 player in an internal pocket, but the jacket also has Motorola Bluetooth technology, so if you subscribe to this technology, you don't have to put anything in your pocket. It almost looks like a laptop in the sleeve. Built into the hood are speakers you can use for sending and receiving calls. You don't have to put anything in your ears since you can hear from the hood. Plus, there aren't any wires sticking out because they're all embedded in the jacket.

The Audex Jacket Series by Burton uses Bluetooth Wireless Technology from Motorola that can link up to Bluetooth-enabled phones, so you can cruise down the slopes while talking. A control panel on the left sleeve can be used to take or make calls and switch songs on an iPod without removing the gadgets from the jacket pockets. There's even a mini caller ID screen on the sleeve. It comes with a removable control panel, detachable hood speakers and microphone. Although a bit pricey, it's worth the splurge $599. burton.com

Burton Audex Hat with Wireless Technology: If you don't want to spend on the jacket, this black knit cap has Bluetooth technology built into the ear flaps, so it looks like headphones are built in. Unisex. $180. burton.com

Ride Levac Parka & Vented Ergo Pants, Cell 10 Series: The parka is a cool zebra print with a zip-out powder skirt with a cord, so it keeps snow out. That way, the snow doesn't blow up into your skin, and there's an inside pocket where you can stash the skirt or the hood. It's waterproof and has a velvety chin guard, so you don't chafe. Inside, there is a mesh-lined packet with Chamois, so you can clean your goggles, and another pocket for your iPod or MP3 player. This one has a plastic cover on it to keep your music player dry. The jacket has mesh venting under the armpits, which zip open to keep you cool, and the pants have mesh venting in the leg at the top on the side of the quad. There's also a little tool pocket at the bottom of the pants, where you could also keep your money, and it's waterproof. Both are made by Ride, which is well-known for snowboard apparel, and the two snap together to keep the snow out. The jacket is $210 and the pants are $150. ridesnowboards.com

Hot Chillys Peachskins Top: First of all, they're silky and soft. They feel fantastic. The base layer is the first layer of insulation you need, and it wicks away moisture and keeps you warm and dry. This shirt is seamless, so there's no chafing or rubbing at the neckline or under the arm. It has inherent antimicrobial properties. The fabric is such that it eliminates bacteria and odor as part of keeping you dry, and that makes it odor-free. It could be used as long underwear, and also comes in men's sizes. $35. hotchilly.com.

Prana Athleta Cortina Softshell pant: This is a terrific workout pant. It's wind resistant and water repellent, but doesn't have that hard feeling that jackets do. It has four-way stretch, so you can run, stretch and do everything you want to do when you're outside, so there's nothing to prohibit total movement. Plus, it's not bulky at all. $120 athleta.com

Adidas Running Trail Fleece Jacket: This is a stylish fleece that you could wear to any bar, but it's totally performance-packed as well. It's made from breathable fabric, is water resistant, protects from wind with the stand-up collar and flip-up mittens and is part of the Stella McCartney line. This is definitely a layering piece, not meant to be used as an outer jacket, especially in 10-degree weather. But, if you're going out for a run, you could definitely just wear this. $300 shopadidas.com

180 Convertible Training Gloves and 180 Exolite Ear Warmers: These are terrific accessories. The gloves convert to mittens. As gloves, they have silicon gel dots on the palm to help your grip. They have a micro-fleece cuff, so you can wipe your sweat off. They also have a retractable hood, which is good for temperature control. The ear warmers are two panels that give thermal insulation and prevent moisture from getting in. They fit over your ears and are connected by a flexible wire that goes behind your head. It's so thin and lightweight that you can easily wear something over it, such as a hat or helmet, with no discomfort. They're adjustable and unisex. The gloves are $30 and the ear warmers are $25. 180s.com