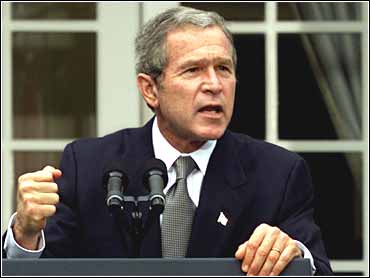 War and recession top President Bush's agenda as he shifts into his second year with an eye on congressional elections and his own re-election down the road.

Health care, Social Security and welfare changes, prescription drug coverage for seniors and a new farm bill will wait like wallflowers for the president's attention.

Elbowing into the mix are foreign policy obligations that will take Mr. Bush from Asia to Mexico in the next two months, and then to Russia, Canada, the Czech Republic and potentially two dozen more countries before year's end.

Mr. Bush marks the one-year point of his presidency on Sunday.

Political obligations will have him stumping across the country this year for Republican candidates in House and Senate races that will decide control of Congress in November and his ability to carry a record of legislative accomplishment into any 2004 re-election campaign.

Just as he began last year almost exclusively focused on tax cuts and education reform, Mr. Bush neatly summed up his 2002 agenda in two sentences this week: "My biggest job is to prevent the enemy from hitting us again," he told Missourians, promising a relentless anti-terrorism campaign.

And, he said, "We can do a better job in Washington, D.C., of addressing this economic downturn."

With pollsters finding voters preoccupied by the economy and terrorism, Mr. Bush is piecing together a to-do list almost exclusively sounding those themes. They will echo strongly in both his Jan. 29 State of the Union address and the spending plan he subsequently submits to Congress, White House communications director Dan Bartlett said.

The president is proposing big increases for the Pentagon and a roughly $15 billion boost — about double this year's total — for domestic security programs like airline safety, bioterrorism prevention and local law enforcement.

Mr. Bush is also pressing to resuscitate the economic stimulus package of tax cuts and unemployment aid that died in the Democratic-controlled Senate last month.

New to his agenda this year is an initiative to restrain lawsuits, something he will talk about in his State of the Union speech. Aides say the president wants to rein in class-action lawsuits and medical malpractice litigation, as well as limit small-business and product liability.

Constraining his game plan is a recession budget, with record surpluses forecast to dissolve into deficits this year.

Mr. Bush has bound himself with a "not over my dead body" vow to fight any Democratic attempts to cover 2002 spending items by delaying or rolling back the $1.35 trillion, 10-year tax cut that he pushed through Congress last spring.

Mr. Bush and his advisers say he will also push for these items, all tailored to fit under the rubric of national and economic security: