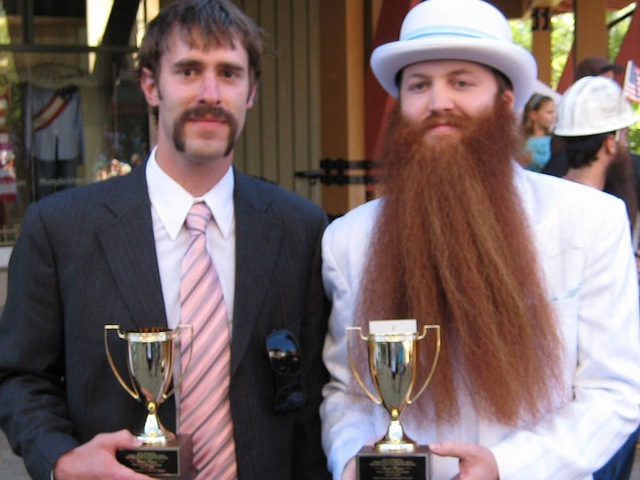 (MoneyWatch) COMMENTARY If you look at pictures of Fortune 500 CEOs, you might be in for a surprise. Very few have facial hair. In fact, hardly any do. The same is true of American political leaders.

Why is that? What's the big hairy problem with leaders having facial hair? Clearly, it bucks the societal trend. Stubble, mustaches and beards of all kinds have been the rage for years. It's definitely cool to have facial hair. Just not if you're an executive or business leader.

There are exceptions, of course. Steve Jobs grew a beard relatively late in life. Oracle CEO Larry Ellison has one. So do Marc Benioff of Salesforce.com, Reed Hastings of Netflix and Richard Branson of Virgin Group. But they're all founders of their companies. There's a different standard for successful entrepreneurs.

Of recent note is former SAP and Hewlett-Packard CEO Leo Apotheker. He has a beard. At least he did when he was fired from both companies. The same is true of Scott Thompson, who was shown the door after just four months as Yahoo's CEO. Wonder what we can infer from that?

I have a beard -- stubble, really -- but I didn't have one when I was in the corporate world. Do I lose consulting business as a result? Maybe. I guess I figured that, after decades of learning the part and being sure I looked it, if I don't know what I'm doing by now I probably never will.

Depending on whose numbers you believe, anywhere from 80 to 90 percent of adult males are clean-shaven, while the percentage of senior executives without facial hair appears to be significantly higher. So, while this analysis isn't exactly scientific, there does seem to be a correlation between climbing the ladder of success and facial hair, although the causality may not be as well studied as we would like.

Here's my take on that, and some advice for those of you who might want to be considered for employment or promotion in the not-too-distant future.

Whenever I say "perception is reality," some smart aleck takes me to task on the specific truth of the phrase. What it means is that, in terms of a buying or hiring decision, the perception of the decision-maker influences their decision. Thus, their perception becomes reality for those impacted by the decision. I trust that's logical enough for the nitpickers among you.

Several studies I came across actually did conclude a positive bias toward clean-shaven men in business hiring decisions. Not only that, but shaving also makes you look younger and less like a lumberjack or homeless person. I'm just saying.

Incidentally, when I became a consultant, two former CEOs commented on my beard. One said I should stand closer to my razor, and the other said I looked more like a rock star than a management consultant. I guess you can take that with a grain of salt (or salt and pepper, if you're a little younger).

Whether the bias is real or not, if you're hot on the trail of a job or a promotion and want to play it safe, I'd go ahead and shave if I were you.

Forget fashion, but looks do count

Some guys grow beards because they think it's fashionable or makes them more attractive. Let's take those one at a time. With the exception of certain industries, the business world leans heavily toward the conservative, meaning they don't know and could care less about fashion. But my gut says it can work against you. Managers want people who care about getting the job done, not fashion.

As for attractiveness, some studies have shown that good-looking people are hired faster, make more money and get more raises. And I'm pretty sure that some men's faces do indeed benefit from facial hair. If you've got one of those faces, just be sure to keep it neat and trimmed.

On the other hand, every survey I read said most women prefer a clean-shaven face.

At the end of the day, you've got to look in the mirror every morning and live with yourself. If you're an entrepreneur type, have that renegade spirit, and want to live and work on your own terms, be my guest -- look however you want. I doubt it will make that big a difference in the overall scheme of things.