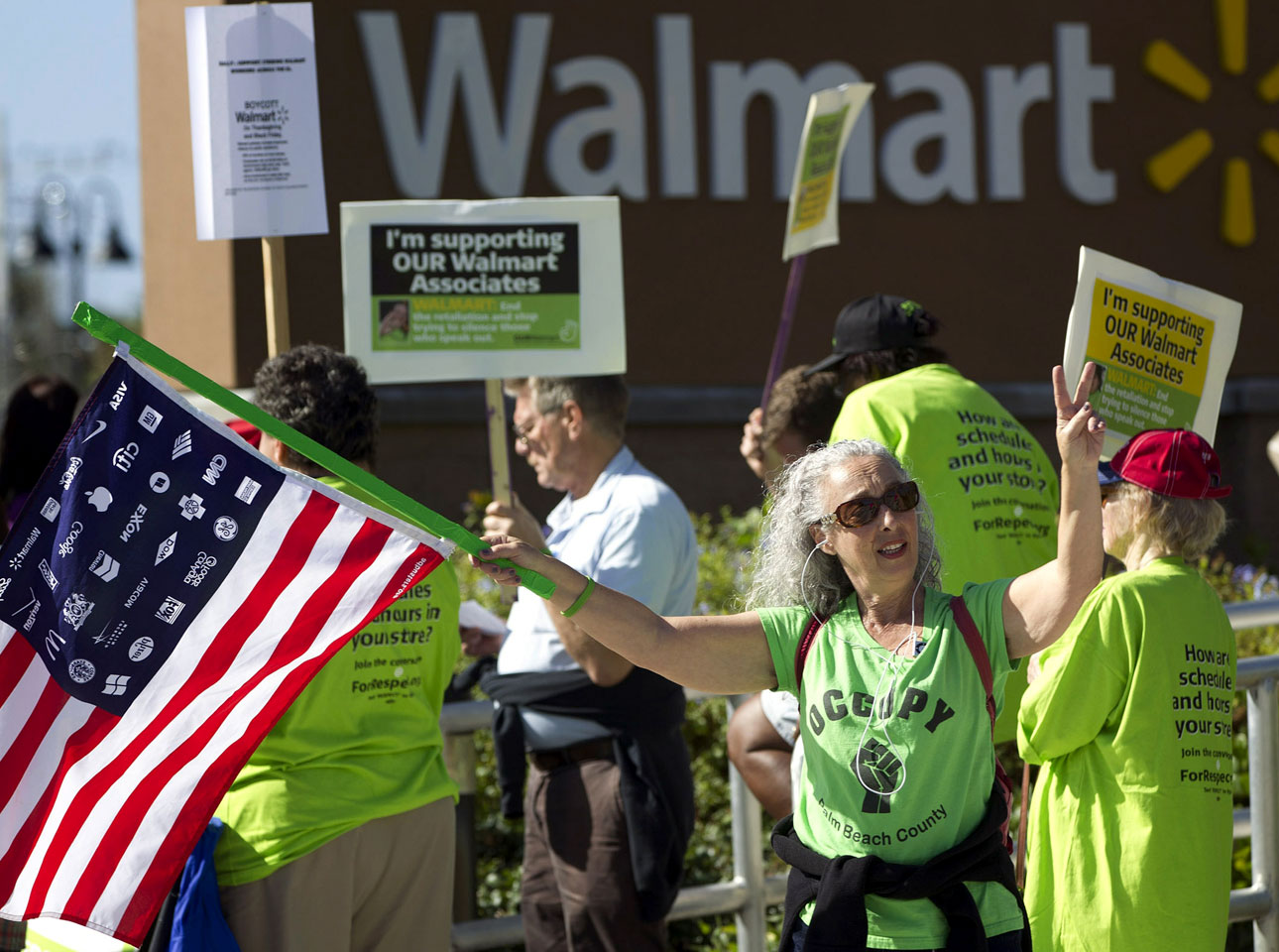 Walmart workers were spotted protesting at dozens of stores across the country Friday morning as part of a nationwide walk-out during one of the biggest shopping days of the year.

More than a 100 protesters in lime green shirts marched outside the Walmart in Lakewood, Colo., on Black Friday to demand higher wages and better benefits.

CBS Los Angeles affiliate KCAL-TV reports a handful of people left the Walmart in Duarte, Calif., early Friday morning to hand out flyers and hold signs in support of the workers. There were also reports of protests in North Carolina, Texas, Minnesota, Florida, Kentucky and other states.

"I did it because I support our Walmart and I don't like the way they treat their associates here," worker Richard Reynoso told KCAL-TV's Art Barron. "And I believe with our help, we could be able to change that."

In Lakewood, Colo., shoppers hesitated as they passed dozens of protesters outside a Wal-Mart but entered without incident. Some protesters held signs playing off of the retailing giant's corporate slogan, "Live better," accusing the company of corporate greed and underpaying its workers.

"This is the way you get a fair shake. You've got to fight for it. You've always had to," said protester Charlie May, of the Industrial Workers of the World labor organization.

The strike was organized by the United Food and Commercial Workers Union and a group called OUR Walmart, which said it was protesting unfair labor practices and demanding better pay for employees. The group had anticipated 1,000 protests across the country.

Some demonstrations began Thursday night, when stores opened their doors early for Black Friday deals. Walmart U.S Chief Executive Bill Simon claimed in a statement that not nearly as many employees walked out as the union had expected.

"Only 26 protests occurred at stores last night and many of them did not include any Walmart associates," he said.

"We estimate that less than 50 associates participated in the protest nationwide. In fact, this year, roughly the same number of associates missed their scheduled shift as last year," Simon said.

Walmart associates are not unionized, so the chain does not officially recognize the UFCW. Company executives defended their treatment of employees.

"Walmart's pay and benefits plans are as good as or better than our retail competitors, including those that are unionized," Steven V. Restivo, Senior Director of Community Affairs, told KCAL-TV.

Of the company's 2.2 million workers, Restivo said Walmart has 250,000 employees who have worked for the company for more than ten years. In 2011, the company promoted 165,000 hourly employees, KCAL-TV reports.

OUR Walmart, however, has said employee income -- often close to minimum wage -- is barely enough to live on, and the group claims it has received complaints of retaliation from the employers for speaking out.

The size and enthusiasm of the protests varied from store to store. None of those protesting at a Walmart in South Philadelphia actually worked there. CBS Philadelphia affiliate KYW-TV spoke to one worker who didn't agree with what was going on outside. "Everything they're saying is wrong, wrong, absolutely wrong," the employee said. "They give us benefits, they give us extras, they give us parties, we get bonuses, this is all wrong."

At a Walmart in Northeast Philadelphia, however, at least two of the protesters were employees. "There's not enough staffing in the stores, we don't get enough hours," one man told KYW-TV.

Shoppers were expected to spend more than $11 billion on Black Friday, considered the first day of the holiday shopping season. Retailers expect to make up to 10 percent of their all-important holiday profits this weekend.