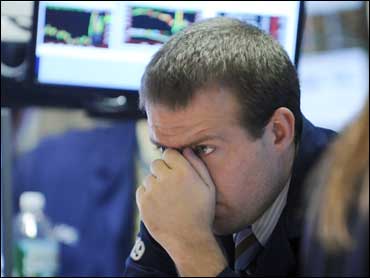 Wall Street capped its worst week ever with a wild session Friday that saw the Dow Jones industrials rocket within a 1,000 point range before closing with a relatively mild loss and the Nasdaq composite index actually end with a modest advance. Investors were still agonizing over frozen credit markets, but seven days of massive losses made many stocks tempting for traders looking for bargains.

The Dow lost 128 points, giving the blue chips an eight-day loss of just under 2,400. The average had its worst week on record in both point and percentage terms, as did the Standard & Poor's 500 index, the indicator most watched by market professionals.

The hair-trigger mentality of the market - a reflection of the intense anxiety on the Street - was evident from the opening bell. The Dow fell 696 points in the first 15 minutes, recovered to an advance of more than 100 before the first hour was over, then turned sharply lower again before moving in swings of hundreds of points at the day's end.

Investors have spent much of the past month shuddering over a credit market that remains frozen, posing a threat to the economy. But Friday's gainers included financial stocks, the ones most decimated amid the ongoing banking and credit crisis.

The major indexes' sharp swings throughout the day were likely exacerbated by the computer-driven "buy" and "sell" orders that kicked in when prices fell far enough to make some stocks look like attractive bets or make other investors want to exit the market. The spurts of buying didn't reflect an easing of the market's despair, and trading is likely to remain volatile when the market reopens on Monday.

"Fear has been running rampant all over the Street. Fear and greed, that's what rules the Street. I think the carcass has been stripped to the bone," said Dave Henderson, a floor trader on the New York Stock Exchange for Raven Securities Corp.

As nervous investors have been pulling billions out of the market, one business has been profiting: sales of home safes are up 75 percent according to America's biggest safe maker, reports CBS News correspondent Anthony Mason.

The Dow has lost 1,874.19 points, or 18.2 percent, over the past week. Its dismal performance outdid the week that ended July 22, 1933, which saw a 17 percent drop - and back then, during the Great Depression, there were six trading days in a week.

The Russell 2000 index of smaller companies rose 23.28, or 4.66 percent, to 522.48, perhaps a welcome sign for investors as small-cap stocks are often first on investors' shopping lists when they think a market turnaround is at hand.

President Bush said Friday the government's efforts to rescue the financial sector was powerful enough to succeed but that it would take some time to be fully implemented.

Finance ministers and central bankers from the Group of Seven nations gathered Friday in Washington to discuss the economic meltdown.

Officials from the G-7 issued a five-point plan aimed at unfreezing a credit crisis that has unhinged Wall Street and markets around the globe. The group pledged to take "decisive action and use all available tools" to battle the crisis, to protect major financial institutions in their countries and to keep them from failing.

Most major central banks around the world slashed interest rates this week after continuing problems in the credit market triggered concerns that banks will run out of money. Analysts have described the mood on trading floors this week as panicked at times, with investors bailing out of investments on fears there is no end in sight to the financial carnage.

A stream of selling forced exchanges in Austria, Russia and Indonesia to suspend trading, and those that remained opened were hammered. The rout in Australian markets caused traders there to call it "Black Friday."

London stocks have lost more than a fifth of their value just this week, reports CBS News correspondent Richard Roth.

In Asia, the collapse of Japan's Yamato Life Insurance caused already nervous investors to pull even more money out of the market - the Nikkei 225 fell 9.6 percent.

CBS News correspondent Barry Petersen reports that Asia depends on exports, which are hurting - Toyota stock is down 40 percent as U.S. sales tumble.