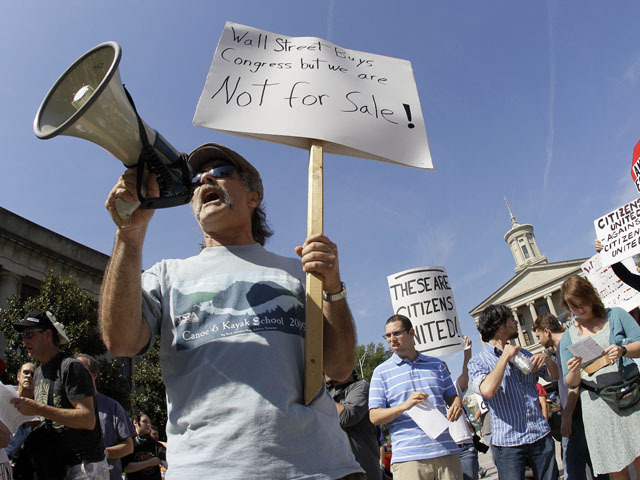 NEW YORK - Their chief target is Wall Street, but many of the demonstrators in New York and across the U.S. also are thoroughly disgusted with Washington, blaming politicians of both major parties for policies they say protect corporate America at the expense of the middle class.

"At this point I don't see any difference between George Bush and Obama. The middle class is a lot worse than when Obama was elected," said John Penley, an unemployed legal worker from Brooklyn.

The Occupy Wall Street movement, which began last month with a small number of young people pitching a tent in front of the New York Stock Exchange, has expanded nationally and drawn a wide variety of activists, including union members and laid-off workers. Demonstrators marched Thursday in Philadelphia, Salt Lake City, Los Angeles and Anchorage, Alaska, carrying signs with slogans such as "Get money out of politics" and "I can't afford a lobbyist."

The protests are in some ways the liberal flip side of the tea party movement, which was launched in 2009 in a populist reaction against the bank and auto bailouts and the $787 billion economic stimulus plan.

But while tea party activists eventually became a crucial part of the Republican coalition, the Occupy Wall Street protesters are cutting President Barack Obama little slack. They say Obama failed to crack down on the banks after the 2008 mortgage meltdown and financial crisis.

"He could have taken a much more populist, aggressive stance at the beginning against Wall Street bonuses, and exacting certain change from bailing out the banks," said Michael Kazin, a Georgetown University history professor and author of "American Dreamers," a history of the left. "But ultimately, the economy has not gotten much better, and that's underscored the frustration on both the right and the left."

Obama on Thursday acknowledged the economic insecurities fueling the nearly 3-week-old Wall Street protests. But he pinned responsibility on the financial industry and on congressional Republicans he says have blocked his efforts to kick-start job growth.

"I think people are frustrated and the protesters are giving voice to a more broad-based frustration about how our financial system works," he said at a nationally televised news conference. "The American people understand that not everybody has been following the rules, that Wall Street is an example of that ... and that's going to express itself politically in 2012 and beyond."

The president has been pushing for a $443 billion jobs plan to be paid for in part through a tax on the wealthy. Republicans have resisted such tax increases.

GOP presidential candidates Mitt Romney and Herman Cain have criticized the anti-Wall Street protests. All the Republican contenders have also pushed back against the demonization of Wall Street. They accuse the Obama administration of setting regulatory policies that have stifled job creation and say his health care overhaul will prevent many businesses from hiring new workers.

In Zuccotti Park, the center of the Occupy Wall Street protests in New York, activists expressed deep frustration with the political gridlock in Washington. While some blamed Republicans for blocking reform, others singled out Obama.

"His message is that he's sticking to the party line, which is `we are taking care of the situation.' But he's not proposing any solutions," said Thorin Caristo, an antiques store owner from Plainfield, Conn.

But Robert Arnow, a retired real estate worker, said the Republicans need to tell their congressional leaders, "You're standing in the way of change."

Quayzy Cayusso, a Web designer, didn't watch Obama's news conference even though it was broadcast on TV monitors at the protest site in New York.

"He's a cool president, but he was given a hard task," Cayusso said. "He should get some gratitude for what he's done so far, but he's been overlooking jobs and not putting much effort into that until now."