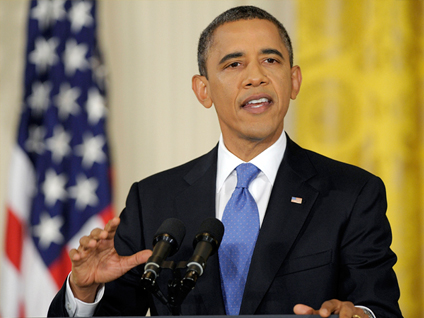 President Obama on Thursday called the "Occupy Wall Street" protests a reflection of a "broad-based frustration about how our financial system works" and pledged to continue fighting to protect American consumers.

The president, speaking at a press conference, said he had heard about and seen television reports on the recent protests on Wall Street, and noted that "I think it expresses the frustrations that the American people feel."

"We had the biggest financial crisis since the Great Depression - huge collateral damage throughout the country, all across main street. And yet, you are still seeing some of the same folks who acted irresponsibly trying to crack down on abusive practices that got us in the situation in the first place," Mr. Obama told reporters. "I think people are frustrated."

Thousands of Americans have gathered in downtown Manhattan over the last two-and-a-half weeks to protest greed, corruption, and economic inequality in the American economic system. The demonstrations, which started off as a relatively unheralded effort by a couple hundred mostly young people, have grown into what may be a burgeoning movement: On Wednesday, a diverse group of unions, having concluded that the demonstrators may have started something important, marched in solidarity with Occupy Wall Street.

In recent days, demonstrators across the country have joined in on the protests to express their anger over the wobbly economy and what they see as corporate greed.Many of those protesting reject both political parties, saying they've been corrupted by corporate money and are concerned primarily with helping the rich.

Mr. Obama sympathized with the protesters' frustrations on Thursday but contended that the most effective way to fight corruption on Wall Street was through strict consumer protection measures.

Mr. Obama said he had "used up a lot of political capital to...make sure that we prevented a financial meltdown," pointing to his push for passage of the Dodd-Frank consumer protection act in 2010. He also pointed to the creation of the Consumer Financial Protection Board as a measure designed to protect American consumers from Wall Street.

He conceded, however, that a number of Republicans were actively trying to derail those measures.

Mr. Obama noted the difficulty he has had in getting congressional approval for a director for the CFPB -- most recently with Ohio Attorney General Richard Cordray, who he has tapped to head up the bureau.

"This is a guy who is well-regarded in his home state of Ohio, has been the treasurer of Ohio, the attorney general of Ohio," Mr. Obama said. "Republicans and Democrats in Ohio all say that he is a serious person who looks out for consumers. He has a good reputation."

Yet, he said, "Republicans have threatened not to confirm him, not because of anything he's done, but because they want to roll back the whole notion of having a consumer watchdog."

"You've got Republican presidential candidates whose main economic policy proposals is, 'We'll get rid of the financial reforms that are designed to prevent the abuses that got us into this mess in the first place,'" he added.

"That does not make sense to the American people. They are frustrated by it, and they will continue to be frustrated by it until they get a sense that everybody's playing by the same set of rules and that you're rewarded for responsibility and doing the right thing as opposed to gaming the system."

Mr. Obama argued that these measures were so important, however, because so many of the actions that caused the 2008 financial crisis were not "necessarily illegal" but rather "immoral or inappropriate or reckless."

"The financial sector is very creative, and they are always looking for ways to make money," he said. "If there are loopholes and rules that can be bent and arbitrage to be had, they will take advantage of it."

As a result, he said, many of the actions that led to the country's current economic straits were not punishable -- or even preventable -- without the imposition of measures outlined in the Dodd-Frank Act, or protections guaranteed under the CPFB.

"I think part of people's frustrations, part of my frustration, was a lot of practices that should not have been allowed weren't necessarily against the law, but they had a huge destructive impact," he said. "And that's why it was important for us to put in place financial rules that protect the American people from reckless decision-making and irresponsible behavior."

He pledged: "I'm going to be fighting every inch of the way here in Washington to make sure that we have a consumer watchdog that is preventing abusive practices by the financial sector."