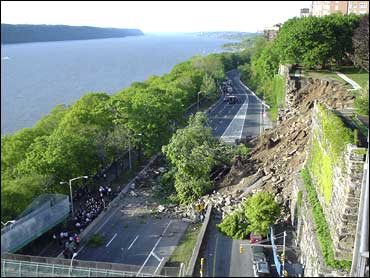 It was a moment of horror and then relief in New York: the collapse of a century-old former castle wall, dumping tons of debris onto one of the city's busiest roads, followed by word from authorities that no one is believed to have been killed or even injured.

It's hard to believe, looking at photos of the mountain of rubble that was the 50-foot-tall stone retaining wall that first sent a few stones falling down into Henry Hudson Parkway rush hour traffic and a few minutes later - as firemen began inspecting the area - the wall and the cliff it supported came completely tumbling down.

Police say one car on the parkway was hit by the debris but was able to drive away.

Numerous cars parked nearby were buried under a massive mound of rocks, trees and dirt. Police say they do not believe anyone is buried in the rubble, which will take some time to remove and is creating nightmarish hours-long traffic jams for area commuters.

City officials say an investigation will determine what led to the collapse, but water damage could have been a cause.

A source at a construction company tells WCBS-TV Reporter Andrew Kirtzman that an engineering firm hired to evaluate the wall called his company last week to take a look and put in a bid on the job.

The source says the wall at that time had a bulge, was "definitely moving," appeared to be in need of supporting braces, but did not seem to be in imminent danger of collapse.

The apartment building closest to the scene, 1380 Riverside Drive, was evacuated and residents were put into a disaster relief center as city engineers determined if that building, a little over a hundred feet away, is in any danger of collapse.

The apartment building, says Department of Buildings Commissioner Patricia Lancaster, appears to be in stable condition. She adds that the buildings department is doing an assessment of other buildings in the area.

Amy Allison, who lives in the building, said she was at home when she heard a "huge crash" at about 4 p.m.

"I looked out my window, and there was a huge landslide starting to happen," said Allison. "I saw all of a wall of dirt just tumbling onto the highway."

Speaking at a news conference at the site hours later, New York Mayor Michael Bloomberg said that 150 feet of the 600-foot-long wall had collapsed but the rest of the structure appears to be stable.

"It was just fortunate that nothing worse happened," he said.

The mayor said police and firefighters on the scene in response to the first few rocks that fell down were witnesses to the collapse about five minutes later.

As firefighters removed debris and tree branches from the parkway's northbound lanes, neighborhood residents gathered along other parts of the retaining wall to see what happened. Several described the wall as shoddy and old and said they had complained about it.

According to Department of Transportation Commissioner Iris Weinshall, the wall - now owned by the Castle Village housing complex - was built between 1905 and 1908 along with Paterno Castle, a mansion owned by real estate developer Charles Paterno. The wall was sold to Castle Village in 1938.

"For years, water has been seeping through, and they have been fixing it," said Weinshall.

Sarah Morgridge, who works for local Councilman Robert Jackson, said workers for Castle Village have been trying to reinforce the wall recently. "There was a major corrective action for over the last six months," said Morgridge. "This is definitely not a case of neglect."

City traffic and Castle Village officials had already scheduled a meeting for Friday to discuss the wall.

Bloomberg praised the work of the multiple city agencies responding to the scene, noting that police department helicopters had carried firefighters and other emergency workers.

"It just goes to show the cooperation that we had," he said.

Earlier in the week, police and fire officials clashed over how to respond to major emergencies, specifically biological, chemical or radiological attacks, and Bloomberg had warned that anyone who didn't follow the city's new protocol - which gives police the lead role - would be out of a job. A top fire chief had criticized the protocol, saying firefighters are better trained and equipped to handle certain emergencies.

The Henry Hudson Parkway, named for the explorer and built in the 1930s, runs along Manhattan's West Side near the Hudson River and travels north to the Bronx and New York suburbs. The Manhattan portion of the highway was temporarily closed during the 1970s because it was in disrepair.