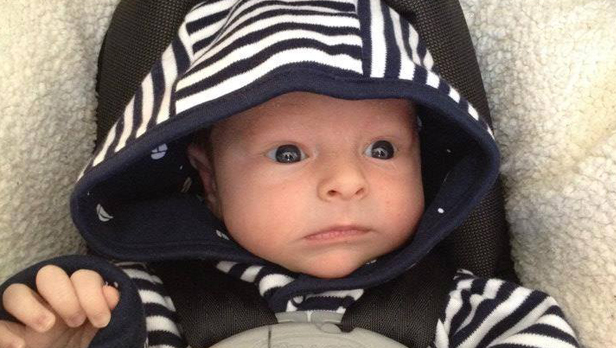 Three weeks after her newborn son was exposed to measles -- and a week after she told his story to the world on Facebook -- Toronto-area mom Jennifer Hibben-White can finally breathe a sigh of relief.

She's been anxiously monitoring baby Griffin for any sign of illness since getting a call earlier this month from York Region Public Health officials warning her that she and Griffin may have crossed paths with a contagious measles patient in a doctor's waiting room on January 27.

Hibben-White wasn't worried about herself -- she'd been vaccinated -- but little Griffin was just 15 days old at the time, far too young to have gotten the shot. She was told to keep him home and isolated until February 17, the duration of the disease's 21-day incubation period.

Finally, the risk appears to have passed. Hibben-White told the Daily Mail that Griffin has a doctor's appointment scheduled to get the all-clear.

Millions of people have followed their story ever since the worried mom took to Facebook with a message that quickly went viral:

I won't get angry at or blame the person in the waiting room. I would have likely done the same thing...you get sick, you go to the doctor. I have no idea what their story is and I will never know. But I do know one thing:

If you have chosen to not vaccinate yourself or your child, I blame you.

You have stood on the shoulders of our collective protection for too long. From that high height, we have given you the PRIVILEGE of our protection, for free. And in return, you gave me this week. A week from hell. Wherein I don't know if my BABY will develop something that has DEATH as a potential outcome.

She went on to debunk common anti-vaccine arguments one by one:

You think you are protecting your children from thimerosal? You aren't. It's not in their vaccine.

You think you are protecting them from autism? You aren't. There is no, none, nada, nothing in science that proves this. If you want to use google instead of science to "prove me wrong" then I am happy to call you an imbecile as well as misinformed.

You think you are protecting them through extracts and homeopathy and positive thoughts and Laws of Attraction and dancing by candlelight on a full moon? You aren't. I PROTECT YOUR CHILD. We protect your child. By being concerned world citizens who care about ourselves, our fellow man, and our most vulnerable. So we vaccinate ourselves and our children.

And along with a photo of her baby son, she wrote:

So, look at Griffin. Tell me why he gets to bear the brunt of your stupidity and reckless abuse of our protection? Tell me.

More than 180 cases of measles have been reported since the latest outbreak started spreading at Disneyland in December, largely among people who were not vaccinated. Measles causes a high fever and distinctive red rash. One in 20 patients develops pneumonia and a small number can suffer encephalitis, swelling of the brain which can result in brain damage, deafness or even death.

Since her Facebook message was posted, Hibben-White says she's been amazed by the response. She told the Daily Mail, "People all over the world who were on the fence emailed me saying they saw my post and it made them look at the data for themselves, make an informed decision, and vaccinate their children. I never expected it to go around the world like it did."