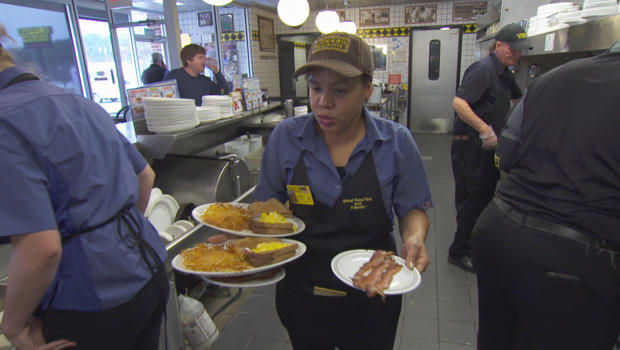 The eyes of the world are on Atlanta today – but what about the stomachs of the world? Well, if they are at the Super Bowl, there's a good chance they'll end up at a Waffle House.

"There is something that appeals to everybody at Waffle House," said customer Pam Tyson. "Whether you're a Southerner and you love grits, or whether you have to have the hash browns. It is a Southern sort of atmosphere. It's a Southern menu. It's Southern."

Founded in 1955, the first Waffle House was just a tiny rectangular box, a neighborhood restaurant where the food was cheap, made to order and, as a nutritionist would say, "calorically dense."

"It was a neighborhood restaurant," said Waffle House spokesman Pat Warner. "In the '50s there weren't a lot of restaurants; everybody ate at home. So, eating out was kind of a fun thing to do."

That original location in Atlanta is now a museum in Atlanta, and the chain today has grown to more than 2,000 restaurants, mainly in the South.

Grill operator and server Julia Williams is the quarterback – the Tom Brady, if you will – at a Waffle House in North Atlanta. "When I wake up, I'm excited to come to work," she said. "I love this job."

Williams handles details and makes decisions on the fly. And her rookie backup today? Correspondent Luke Burbank. "You're taking in all the orders, and you're making sure that the plates are marked right," Williams explained.

It quickly became apparent that Burbank was un-coachable. "The breakfast everybody's having, this is all riding on me?" he asked.

"That's a terrible idea. I have no idea what I'm doing!"

It didn't help that Waffle House has basically its own language, such as the order for a "smothered and covered" biscuit plate. "Smmothered" means with onions, and "covered" means topped with cheese.

And when it came to actually cooking the eggs, Burbank was somehow even worse. "Oh, my God, everybody stop ordering food. I need some time!" he said.

As he was clearly unqualified to make the food, Burbank figured he'd at least eat some of it … okay, a LOT of it … with Atlanta Magazine food critic Mara Shaloup.

She describes the waffle House's offerings as "basic food. It's, like, mostly brown. You don't see anything green on this menu! It's meats and starch and sugar and butter and grease and everything that's comforting and wonderful."

Waffle House also prides itself on being a comfort when things are anything but wonderful, staying open through hurricanes. FEMA even has a name for it: The Waffle House Index, meaning that if a storm is severe enough to shut down a Waffle House , then the government knows the area has been hit hard.

Of course, staying open 24/7, 365 days a year means Waffle Houses are pretty much the go-to destination for late-night eating.

Customer Lynda Osborne told Burbank, "When I get a Waffle House craving, I have to go."

Regardless of the hour? "Apparently!" she laughed. "Because it's pretty late right now!"

It didn't feel late to a group of college freshman sitting down to tuck in. "We be up 'til, like, 3:00, 4:00 in the morning, so this is probably the only place that's near us that's open," one said.

"And cheap," another added.

"And it's actually good."

One young woman told Burbank, "She always told me to try Waffle House drunk; she said it's always better when you're drunk."

"That's a bold parenting move. Like, is this gonna be helping you guys out tomorrow morning?"

When the Super Bowl's over, the victors will have their spoils. But the losers? Well, at least they'll be able to smother and cover their sorrows at the Waffle House.