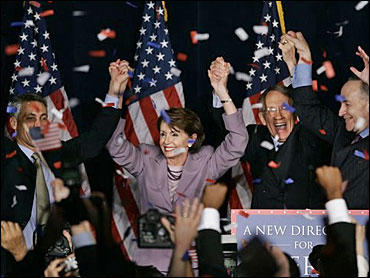 President Bush called it a thumping. To Democrats, it felt more like a restoration after a long turn out of power in Congress and several big-state governorships.

By any description, the 2006 elections marked a voter revolt, fueled by anger over the war in Iraq and corruption at home, yet carried out with remarkable precision.

It wasn't that Democrats gained their congressional majorities by winning all the close races — they didn't.

But in a year when Democrats took 29 House seats, six Senate seats and six governorships away from the Republicans, they did not surrender any of their own.

"If you look at race by race, it was close," Mr. Bush said after the voters stripped his party of control of the House and Senate for the final two years of his term. "The cumulative effect, however, was not too close. It was a thumping."

The election marked the first time since the attacks of Sept. 11, 2001, that the war on terror did not work to the advantage of the Republicans.

The GOP gained seats in Congress in 2002, little more than a year after terrorists struck the United States. Mr. Bush won a second term in 2004, campaigning as the steely steward of the global war on terror.

He decided early on to make the war on terror a centerpiece of his campaigning this year, too. In a closed-door meeting with House Republicans in February, he vowed to stay the course. "Don't lose your nerve. I'm not going to lose mine," one member of his audience quoted him as saying.

But three weeks later came the first obvious danger signal. A furor erupted in Congress when it was disclosed that a state-owned company in the United Arab Emirates planned to take over a British firm that held contracts at ports in six U.S. cities.

Mr. Bush defended the deal, but he was stung by criticism from Republicans in Congress. "In regards to selling American ports to the United Arab Emirates, not just no, but hell no," Rep. Sue Myrick, R-N.C., wrote him. The deal was scrapped.

Deciding they had been too timid in past campaigns, Democrats resolved to challenge Mr. Bush on an issue that had worked to his favor.

"Welcome the national security debate and engage in it," several top strategists advised in a memo circulated more than six months later. "... Stress the seriousness of the threat and Democrats' determination to address it using statements such as: "We need stronger tools to monitor, hunt down and kill terrorists."

They did, on Election Day, more than 70 percent of voters surveyed in exit polls said terrorism was important in their vote, and they cast their ballots in roughly even numbers for Republicans and Democrats. That marked a huge shift over 2004, when Mr. Bush held an advantage of nearly 20 percentage points over Sen. John Kerry on the same issue.

The war was unpopular, after nearly four years and more than 2,800 U.S. military combat casualties, and Democrats expressed pleasure that Mr. Bush continued defending it.

"The White House seems to be playing into our hands," said Sen. Chuck Schumer of New York, head of the Democratic senatorial campaign effort. "In an effort to strengthen their base, they keep reminding the public that there's not going to be any change in Iraq."

Serial scandals wounded Republicans, too, grievously so in the House.

In the months leading to the elections, Rep. Bob Ney of Ohio resigned after pleading guilty to corruption. Rep. Tom DeLay quit in the face of state campaign finance charges in Texas, although he maintains his innocence. Rep. Mark Foley of Florida departed, too, after the public disclosure of sexually suggestive computer messages he had sent to teenage male pages.

Republicans lost all three seats, and a nationwide exit poll said scandal as well as the war on Iraq and the issue of terrorism played a large role in the Democratic sweep.

Mr. Bush's attempts to raise his poll ratings, which showed modest success early in the month, sputtered out. Republican leaders in the House were forced to spend three precious campaign weeks answering questions about whether they had known of the salacious computer messages that Foley had sent, whether they had acted promptly enough once they were informed.

"I didn't think anybody at any time in my office did anything wrong," Speaker J. Dennis Hastert, R-Ill., said 10 days into October.

But what he said seemed overshadowed by where he said it.

He stood in front of a graveyard, tombstones visible in the background, to the delight of Democrats and horror of Republicans. 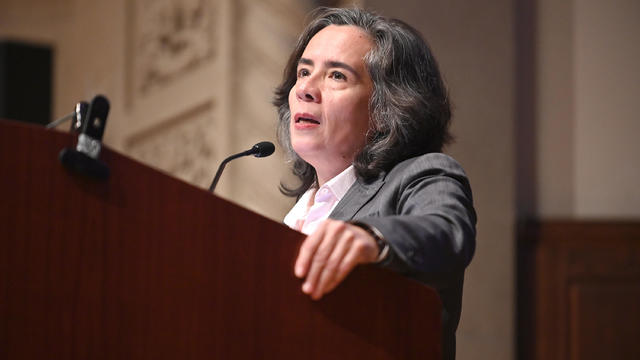 Dr. Oxiris Barbot wrote that in her resignation letter that the department "must be better leveraged."