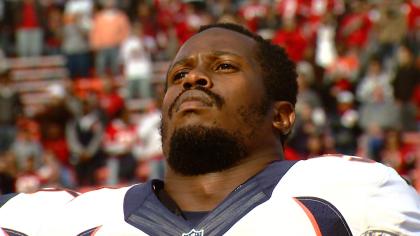 (CBS) DENVER - Denver Broncos linebacker Von Miller is on the list of potential witnesses for a death penalty trial for a man accused of killing five people at a bar in Denver last year, CBS Denver reports.

Five people were stabbed to death and the bar was set on fire to cover up the crime, the station reports. Two men have pleaded guilty for their roles in the crime and now prosecutors are seeking the death penalty against a third suspect, Dexter Lewis. Miller is reportedly listed as a potential acquaintance of Lewis.

A spokesman for the Broncos says the team is aware of the situation but says Miller has "zero direct involvement in the case."

The station reports Miller already faces a lengthy suspension from the NFL for allegedly violating the league's substance abuse policy. He was also arrested last week on a warrant for failing to appear in court on a traffic violation. His most recent arrest and the fact that he may be called to testify in the death penalty trial are not related to his suspension.