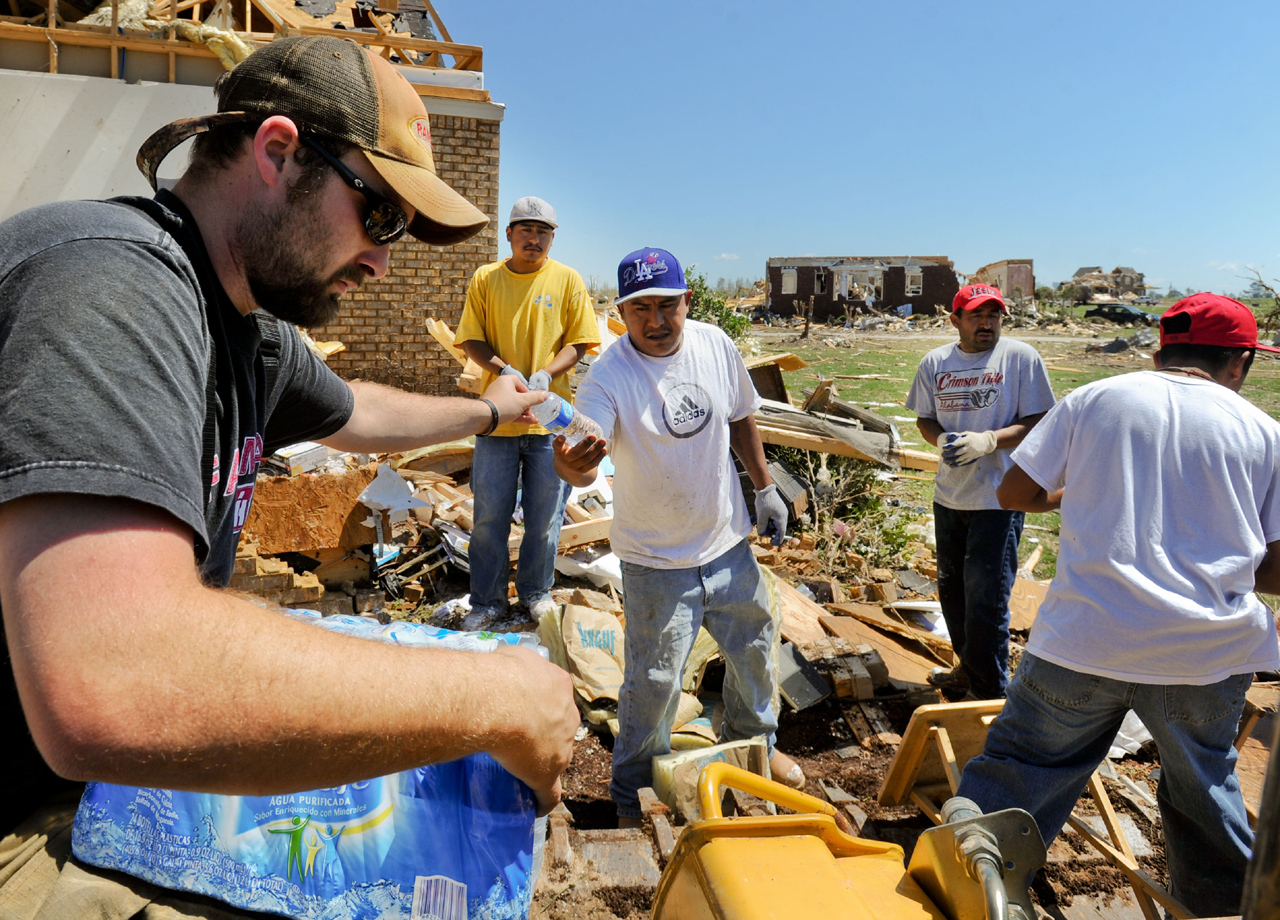 PRATT CITY, Ala. - Whether it's refilling blood-pressure medicine or patrolling neighborhoods in a grocery-filled pickup truck, tornado victims in splintered Southern towns say volunteers are ensuring they're well-fed and warm at night. At least a few, though, say they need more from the government: Help getting into their homes and cleaning up endless debris.

Across the twister-ravaged South, students and church groups aggressively tended to those who needed it most, clearing away wreckage and handing out food and water.

Wednesday's tornadoes marked the second-deadliest day of twisters in U.S. history, leaving 341 people dead across seven states - including 249 in Alabama. Thousands were hurt, and hundreds of homes and businesses have vanished into rubble.

CBS News correspondent Dean Reynolds said across much of the tornado zone devastation stretches for miles - block after block of homes torn apart by the powerful twisters.

In Tuscaloosa, a Red Cross shelter was handing out clothes and providing counseling for folks like Carol Peck, 55, and her 77-year-old mother. She said the shelter's First Aid station even refilled her blood pressure pills without her having to ask.

She can't explain how it happened, but she suspects her clinic contacted the shelter.

"Evidently, because I sure didn't call," she said. "They knew I was here. I don't know how, but they found me."

How to help tornado victims in the South
Photos: Aerial views of Tuscaloosa, Ala.
Miss. tornado was highest-rated storm: EF-5

In Ringgold, Ga., Poplar Springs Baptist Church had been transformed into an informal help center. Crews were dispatched from the church, some with chain saws to chop through the debris, others with bottled water and food. Inside the gymnasium, a barbecue buffet was feeding those without power.

"You've got elderly people out there who can't get out there and do it," said volunteer Kathleen Hensley, 40, of Ringgold. "They need a hand."

The University of Alabama's athletic department was pitching in around hard-hit Tuscaloosa, with more than 50 athletic training students giving Gatorade, bottled water and protein bars to residents.

"Anything they have to give athletes, they're giving away," said Jenny Sanders, one of the volunteers.

And most were grateful to get whatever they could.

Niki Eberhart, whose home in the Alberta City neighborhood of Tuscaloosa was shredded by the tornado, said Saturday that her husband and two children are getting everything they need at the shelter. And it isn't the first time they've counted on the Red Cross. When their home in Meridian, Miss., burned down last year in an electrical fire, Eberhart said the Red Cross responded within an hour.

"We feel like we've been blessed," she said. "Both times it could have been much worse. We lost things. Material possessions can be replaced."

Eberhart and her husband, Shane, also had already gotten help from FEMA workers at the shelter. And while they wait for a response from the feds, Eberhart dismissed relatives' offers of sympathy.

"I told them we're having great luck because it could have been so much worse," she said. "If you don't have any bad times, how are you going to appreciate the good times?"

As some tried to clear the rubble and sort through belongings, others took on the task of burying the dozens who died. Several funerals were being held in Rainsville in northeastern Alabama, including services for 70-year-old Hubert Whooten, his 70-year-old wife, Juanita, and her mother, Lethel Izell, 86.

"They were just normal, hardworking country folk," family friend Kevin Black said outside the Rainsville Funeral Home. "If they seen you, they're gonna call you by your name and (ask), 'How're you doing?' That's how it is around here."

But planning funerals was a struggle for many as they dealt with destroyed homes.

"A few of the families I met, with they've lost everything," said Jason Wyatt, manager of Tuscaloosa memorial Chapel. "It's hard for me to hold my composure. They don't have clothing or anything."

Many residents still couldn't even get into the town of Cordova, Ala., where stern soldiers cordoned off the few roads that weren't left impassable by fallen trees. The school, one of the few buildings to survive the twister, was buzzing on Saturday. Students stuffed baskets full of lunches at the cafeteria while their parents sorted supplies across the hall.

Landmarks in the town northwest of Birmingham, had been obliterated.

"I knew it was bad. But pictures don't begin to describe it," said 19-year-old college student Rachel Mitchell as she drove through town. "This is really hard. This is where I grew up and now nothing is here that I remember."

Still, frustration reigned for some. Eugene Starks, 82, worked with a tow truck driver Saturday to salvage a blown-out car from what was left of his garage in Pratt City, a blue-collar suburb of Birmingham. He said he was grateful to have survived the storm - "I give God credit" - but he needed more help recovering belongings from his home.

"I'm trying to do what I can myself," he said. "I hope the government steps in, but I'm not holding my breath."

Volunteer Rachel Shugart catches her balance as she climbs on top of a destroyed home to search for valuables in Tuscaloosa, Ala., April 30, 2011. (AP Photo/Dave Martin)

On the outskirts of Phil Campbell in northwestern Alabama, 44-year-old Nickey Hughes was left to protect the rubble of his mobile home in a family-size tent he was sharing with his three grandchildren. He hasn't been able to find a shelter or a vacant hotel, so he's staying in the tent to scare off would-be looters.

Gov. Robert Bentley had dispatched 2,000 National Guard troops around Alabama to help residents and keep the peace. Many blocked off roads or patrolled neighborhoods to keep away gawkers and looters. Others helped residents sift through their shattered homes.

Carletta Wooley, 27, was going through some of her belongings in Holt, a community just outside Tuscaloosa. A pile of her family's belongings stood at the foot of a tree -- a mirror, some hats, a pillow, a stereo. One of the soldiers picked up a photograph and handed it to her -- it was of her son, when he was a baby.