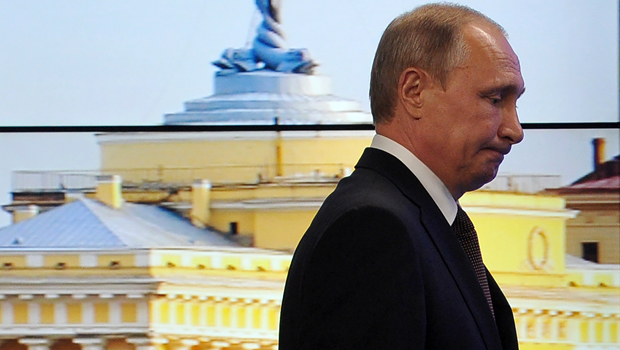 "America is a great power - today probably the only superpower. We accept that," the Russian president said at Russia's main economic forum, according to the Reuters news agency. "We want to and are ready to work with the United States."

Putin said that the world, including Russia, needs a strong U.S. At the same time, Russia doesn't want the U.S. to meddle in its domestic affairs or try to prevent the European Union from developing closer economic ties with Moscow, he said.

He argued that while U.S. businesses suffered little damage from anti-Russian sanctions imposed by Washington and the EU, the damage to Europe was far greater. He said that he was wondering why the Europeans should suffer from it.

"The Americans are saying their partners should put up with it, but why should they?" Putin said.

The United States and the European Union slapped Russia with economic sanctions in 2014 after it annexed Ukraine's Crimea peninsula and threw its backing to separatist rebels in eastern Ukraine. Moscow retaliated by banning imports of meat, vegetable and dairy products from the EU.

Putin's comments come during a strained period between the U.S. and Russia over Ukraine and the bloody civil war in Syria.

On Thursday, the Pentagon confirmed a series of Russian airstrikes targeted U.S.-trained rebels inside Syria.

The attacks in the southern part of the country hit forces who have received U.S. military support. They were equipped to fight the Islamic State of Iraq and Syria, or ISIS. Russia's military has been backing the regime of Syrian dictator Bashar Assad.

Also Friday, Putin called on European leaders to heal ties with his country despite sanctions after meeting with European investors who said they want to expand their businesses there.

Putin said top German and French investors expressed interest to invest more in Russia despite the weight of the sanctions, some of which the European Union extended just as Putin was speaking.

"Politicians should meet the businessmen halfway, show wisdom, long-term thinking and flexibility," Putin said. "We need to bring back trust to Russia-European relations and restore the level of cooperation." Russia, he said, doesn't need a new Cold War.

He stressed that Russia's ban on EU foodstuffs and other retaliatory measures were imposed "in response" to the EU sanctions.

"We don't bear grudges and we are willing to meet our European partners halfway - this, however, must not be a one-way street," he added.

Commenting on former French President Nicolas Sarkozy's suggestion that Russia should help warm ties by lifting its EU food imports ban, Putin said Russia could consider it if it were sure that the EU will follow suit.

"We would be ready to take such steps if we were confident that they wouldn't cheat us," he said.

Putin also accused the U.S. and its NATO allies of ignoring Russia's legitimate interests. He said there is no reason for NATO's continued expansion, and noted that the U.S.-led NATO missile defense plans pose a threat to Russia.

Western leaders and company executives went to Russia's St. Petersburg Economic Forum this year after a two-year break that felt like a boycott, signaling a growing fatigue in some parts of Europe over the sanctions. The Russian ban on food imports has hurt agricultural exporters like Greece and Italy.

Putin met with the CEO of Royal Dutch Shell and other international executives on Thursday, telling them that Russia is open to Western investment despite the strained ties.

Alexei Pushkov, the chairman of the foreign affairs committee of the Russian parliament, said on Twitter on Friday that "the dynamics" at the St. Petersburg gathering "shows that the restoration of ties between Russia and the EU will be slow and contradictory but inevitable."

As Putin was delivering his speech in St. Petersburg, the EU extended for another year some of its sanctions targeting Russia. They target imports from the Crimean peninsula and investment there, among other measures. On top of that, cruise ships from the EU cannot call at ports there, in an attempt to hurt the tourism industry.

The EU currently also has other sanctions targeting Russia more directly, limiting access for Russian companies to Western capital markets, banning arms trade and limiting access to sensitive oil-industry technologies. It also has slapped asset freezes and travel restrictions on 146 people and 37 entities. Some of these sanctions need to be extended in the coming weeks and months.

The announcement came a day after EU Commission President Jean-Claude Juncker met with Putin in St. Petersburg. Juncker, the highest ranking EU official to visit Russia since the Crimean annexation, told the forum on Thursday that the EU needs to engage with Russia despite the painful sanctions exchanged over the past two years.

Italian Prime Minister Matteo Renzi, who was a special guest at the forum and led numerous Italian companies to sign a plethora of deals, said after talks with Putin that there should be no automatic extension of sanctions.

Renzi said the EU should analyze the progress of the Minsk peace deal for eastern Ukraine, and Ukraine's compliance with it should also be reviewed. His words echoed the statement from Putin, who said that Ukraine has failed to approve legislation on a special status for the east to honor its end of the deal.

Vladimir Chizhov, Russia's envoy to the EU, told the RIA Novosti news agency that Friday's decision by the EU to extend the sanctions was no surprise. But he suggested it was not a foregone conclusion that the other, more direct sanctions against Russia would be extended in coming weeks.

"Let's see what happens next," he said.