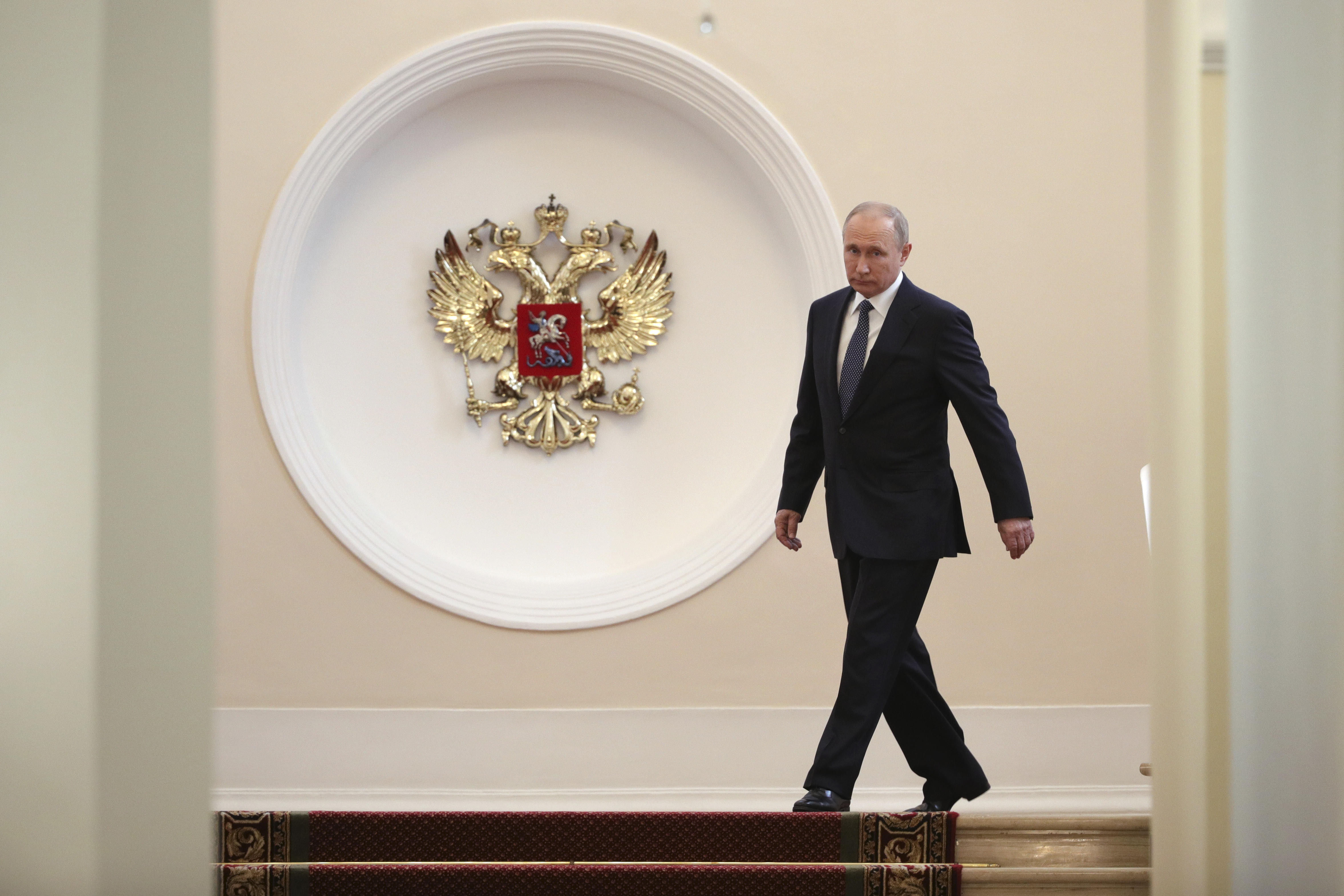 MOSCOW -- Vladimir Putin was inaugurated on Monday for a new six-year term as President of Russia after winning re-election in March. Putin took the oath of office in gold-leaf bedecked hall at the Kremlin, vowing to pursue an economic agenda to boost living standards across the country. He said improving Russia's economy following a recession partly linked to international sanctions would be a primary goal of his next six-year term.

"Now, we must use all existing possibilities, first of all for resolving internal urgent tasks of development, for economic and technological breakthroughs, for raising competitiveness in those spheres that determine the future," he said in his speech to thousands of guests standing in the elaborate Andreevsky Hall of the Grand Kremlin Palace and two adjacent halls.

Although Putin has restored Russia's prominence on the world stage through military actions, he has been criticized for inadequate efforts to diversify Russia's economy away from its dependence on oil and gas exports and to develop the manufacturing sector.

If Putin fulfills the goals he's set for his new six-year term as president, Russia in 2024 will be far advanced in new technologies and artificial intelligence, many of its notoriously poor roads will be improved, and its people will be living significantly longer.

There's wide doubt about how much of that he'll achieve, if any of it. Analysts assessing the prospects of his term often use the expression "neo-stagnation." And less than half of the population really trusts him, according to a state polling agency.

As CBS News correspondent Elizabeth Palmer reports, Russians angered by the impending inauguration protested over the weekend in scores of cities across the country -- and police responded by reportedly arresting nearly 1,600 of them, including protest organizer Alexei Navalny, the anti-corruption campaigner who is Putin's most prominent foe.

Police seized Navalny by the arms and legs and carried the thrashing activist from Moscow's Pushkin Square, where thousands were gathered for an unauthorized protest.

Police also used batons against protesters who chanted "Putin is a thief!" and "Russia will be free!"

Demonstrations under the slogan "He is not our czar" took place throughout the country, from Yakutsk in the far northeast to St. Petersburg and Kaliningrad on the fringes of Europe over the weekend.

After being sworn in at the beginning of the ceremony in the ornate Grand Kremlin Palace, Putin said he was aware of his "huge responsibility" and vowed to defend the "invincible integrity of the motherland."

"The purpose of my life and work has always been serving our people, our montherland," he said, thanking the Russian people for their "confidence" in him.

Putin won the new term, which will extend his rule in Russia to a quarter-century if he completes it, with an official tally of 77 percent of the vote in March. Although there were complaints of ballot-stuffing and other violations, his support was clearly high. Yet, when state pollster VTsIOM asked Russians a month later which politician they trusted to solve the country's problems, only 47 percent chose Putin.

The apparent discrepancy between the vote total and his trust rating suggests that Putin is important to Russians not so much for what he accomplishes but for what he is - the embodiment of their national identity.

Putin's strong suit is in projecting Russian power. The technology and lifespan improvements that he foresaw in his state-of-the-nation address shortly before the election didn't attract as much attention as his claim that Russia had developed an array of new and allegedly invincible nuclear weapons.

He is sure to continue to assert Russia's role on the world stage, apparently committed to military involvement in Syria until the bitter end and showing no signs of backing down from Moscow's support for separatist rebels in eastern Ukraine.

Although painful sanctions have been imposed on Russia for its annexation of Crimea, its involvement in eastern Ukraine and its alleged interference in the U.S. presidential election, Putin appears to be willing to pay the price, especially because rising world oil prices have restored some revenue.

The economy has partially recovered from the depths of 2015-16 when the ruble lost half its value, but concerns persist about long-term prospects, especially if Russia is unable to boost its manufacturing sector and wean the economy off its overwhelming dependence on oil and gas exports.