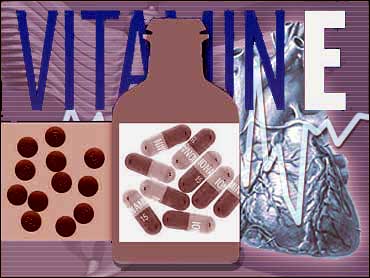 People with a common, obesity-related liver disease that has no known treatment got a surprising benefit from vitamin E pills, researchers reported Wednesday.

It appears to be the first time that a vitamin supplement has been shown to help treat a major ailment not caused by a nutrient deficiency. However, doctors warned that this does not mean people should automatically take vitamin E since some research suggests it might raise the risk of other problems.

The latest study tested it for nonalcoholic fatty liver disease. Fat buildup can cause the liver to become inflamed and scarred over time and in severe cases, to fail.

The disease usually develops in people who are middle-aged and overweight or obese. Up to 5 percent of Americans have the most serious form of it, and as many as 20 percent have fat in their livers but no organ damage.

In the study published online in the New England Journal of Medicine, 247 adults with advanced fatty liver disease were randomly assigned to take a high dose of vitamin E (800 international units), the diabetes drug Actos or dummy pills for nearly two years.

The vitamin and drug were tested because earlier research suggested liver cell deterioration and insulin resistance might be involved in the development of the disease.

Biopsies before and after treatment showed that liver function improved in 43 percent of those in the vitamin E group compared with 19 percent in the placebo group.

"In all honesty, I was surprised," said the lead researcher, Dr. Arun Sanyal of Virginia Commonwealth University. "A vitamin has not been previously used to cure a serious disease" that is not caused by a deficiency.

Vitamin deficiency has been blamed for a range of health problems from rickets and osteoporosis from a lack of vitamin D to scurvy from not enough vitamin C.

Study participants on the diabetes drug Actos also improved, but to a lesser degree and with a drawback: gaining 10 pounds on average, which remained even after they stopped taking the drug. Four people who took vitamin E developed diabetes, but the study was too small to determine if the vitamin played any role.

The National Institutes of Health was the study's main sponsor. A U.S. subsidiary of Japan-based Takeda Pharmaceutical provided the drug and California-based supplement maker Pharmavite supplied the vitamin E capsules. Sanyal, the lead researcher, has received consulting fees from Takeda and other drug companies.

"For patients who are really at risk of progressive liver disease, I think it's worthwhile. For the vast majority who just have fatty liver, I'm not sure it will help them at all," said Saab, who had no role in the study.

Dr. Zobair Younossi, executive director of research at the nonprofit Inova Health System in Virginia, said people with nonalcoholic fatty liver disease at the very least should make lifestyle changes such as eating a healthy diet and exercising to shed the pounds.

While vitamin E may help certain people with obesity-related liver disease, "I wouldn't get started on high-dose vitamin E without discussing it first with a doctor," said Younossi, who has no connection to the research.

In recent years, hype over vitamin supplements in treating major diseases has not panned out. A 2008 study found that vitamins C and E pills do not ward off heart disease in men and vitamin E even appeared to raise the risk of bleeding strokes. Another study found the same supplements do not help prevent cancer in men.