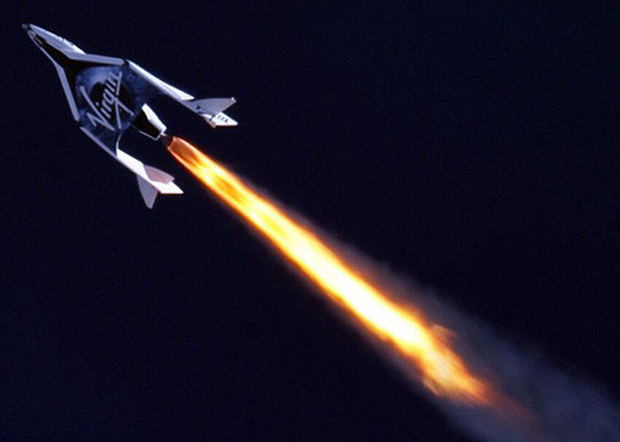 A private spaceship designed to carry space tourists made its first rocket-powered test flight today (April 29), reaching supersonic speeds as it paved the way toward commercial flights in the near future.

Virgin Galactic's SpaceShipTwo space plane fired its rocket engines for the first time during flight this morning in a test from California's Mojave Air and Spaceport. The vehicle was carried aloft by the mothership WhiteKnightTwo, and then released in midair at an altitude of about 46,000 feet (14,000 meters). At that point, SpaceShipTwo test fired its rocket engine, designed to propel the craft of the rest of the way up to space.

After a short 16-second burn today, SpaceShipTwo reached a maximum altitude of 56,000 feet (17,000 meters) before flew back to Earth. The trip marked the 26th test flight of the vehicle, and the first "powered flight," which propelled the ship to Mach 1.2, fast enough to beat the speed of sound, which is 761 miles per hour (1224 km/h). [Photos: 1st SpaceShipTwo Powered Flight Test]

"The rocket motor ignition went as planned, with the expected burn duration, good engine performance and solid vehicle handling qualities throughout," Virgin Galactic president and CEO George Whitesides said in a statement. "The successful outcome of this test marks a pivotal point for our program. We will now embark on a handful of similar powered flight tests, and then make our first test flight to space."

SpaceShipTwo is a suborbital vehicle, designed to carry space tourists on trips to the edge of space and back for $200,000 a ride. Though these flights wouldn't make a full orbit of the planet, they would provide passengers with a brief experience of weightlessness and a view of Earth from the blackness of space.

Virgin Galactic is backed by British billionaire Sir Richard Branson, who was on the ground at Mojave to view the flight today.

"This is a momentous day and the single most important flight test to date for our Virgin Galactic program," Branson wrote in a blog post on Virgin's website. "What a feeling to be on the ground with all the team in Mojave to witness the occasion."

If test flights continue to go well, SpaceShipTwo may carry passengers as soon as this year or 2014, Virgin Galactic officials have said. Already, more than 500 people have signed up for the flights, which will be run out of Spaceport America in New Mexico once testing is complete.

The test flight began this morning at 7 a.m. PDT (10 a.m. EDT, or 1400 GMT). Flying aboard SpaceShipTwo were pilot Mark Stucky and co-pilot Mike Alsbury, both test pilots for the private aerospace firm Scaled Composites, which built SpaceShipTwo for Virgin Galactic. It comes after two recent glide test flights, on April 3 and April 12, that set the stage for today's landmark powered test.

Scaled also built the space plane's predecessor, SpaceShipOne, which won the $10 million Ansari X Prize in 2004 by becoming the first commercial vehicle to fly people to space and back twice in a week.