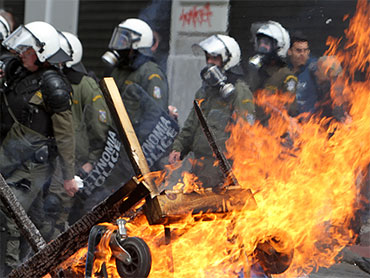 Riot police used tear gas and baton charges to disperse rioters who chased the ceremonial guards in 19th-century kilts and tasseled garters away from the Tomb of the Unknown Soldier outside the parliament, while a top trade union leader was roughed up by left-wing protesters.

It was the biggest outburst of violence since Greece's debt crisis escalated late last year. Police say they arrested 5 people, and seven officers were injured.

Greece's financial troubles have shaken the European Union and its shared euro currency, whose rules were supposed to prevent governments from running up too much debt.

Up to 7,000 demonstrators gathered outside as lawmakers debated the austerity package, which aims to save $6.5 billion with measures including higher consumer taxes and cuts to public sector workers' pay of up to 8 percent.

Greece didn't ask for financial support, and Germany didn't offer any in talks between Merkel and Papandreou, while Merkel said there would be a common push to crack down on market speculation that has led Greece's cost of borrowing to skyrocket.

"I repeat that Greece has not requested financial support ... and I thank (Germany) for its cooperation in facing speculators," Papandreou said on the second of a four-city tour that began in Luxembourg Friday morning and will take him to Paris Sunday and Washington on Tuesday.

Merkel also called for an end to market speculation that the indebted country will default.

"Germany can express its solidarity," Merkel said, adding that she made it clear that "we are here to help, show understanding."

Merkel added that her country could help Greece with its expertise and in other ways. Strict fiscal policy has helped propel Germany to Europe's biggest economy.

But she didn't give any specifics of how Germany would show solidarity, or what concrete steps will be taken to tackle speculators.

"The support was political support, without mechanisms," government spokesman Giorgos Petalotis told reporters after the meeting, which was also attended by Greek Finance Minister George Papaconstantinou.

Still, the Greeks insisted they were satisfied with the outcome of the meeting, and had received all that could be expected.

"We need political and moral support and we got that today from the German government," Papandreou said.

Earlier Papandreou met in Luxembourg with Prime Minister Jean-Claude Juncker, head of the group of eurozone finance ministers. He is scheduled to visit Paris Sunday.

Demonstrators attacked the two military guards and their escorting officers, smashing windows and kicking the guard posts. Earlier, leftwing protesters attacked the head of Greece's largest trade union who was addressing the crowd.

GSEE head Yiannis Panagopoulos traded blows with his assailants before being whisked away bloodied and with torn clothes. A union statement condemned the "murderous attack," and said Panagopoulos was out of danger in an Athens hospital.

GSEE and the ADEDY umbrella civil servant union held work stoppages to protest the austerity measures, while hospitals, schools and public transport were closed down. Both unions said they would hold a new nationwide strike and protest march on March 11.

An earlier protest ended peacefully, while there were smaller clashes during two protests in Thessaloniki, Greece's second-largest city.

The center-left government says it is seeking a total euro16 billion ($21.87 billion) in savings this year, to reduce a bloated budget deficit of some euro30 billion that is over four times the EU limit as a percentage of annual output.

But the newly-approved law hit a snag later Friday as striking interior ministry employees occupied the government printing press, in a bid to stop the cutbacks coming into force. Under Greek law, all new legislation must be published in the Government Gazette - issued by the printing office - before it take effect.

It was unclear how long the protesters intended to stay in the building.

The cuts are key in convincing bond markets to loan the country money and to win support from the European Union.

Jean-Claude Juncker said after meeting Papandreou that "we have to deal with the problem as a euro area."

He said it was acceptable for the IMF to offer technical assistance. But he insisted: "as the chairman of the euro group I'd like to exclude any further involvement of the IMF."

Papandreou insists Greece is not seeking bailout money from the European Union but a public commitment to a financial rescue plan that would reassure markets.

Asked what he wants from Merkel, Papandreou said in an interview published Friday in Germany's daily Frankfurter Allgemeine Zeitung that Greece needed "support ... that there is European support so that we can borrow money under reasonable conditions."

He said that Greece has never asked for a bailout, but lack of support would hurt his reform plans.

"And that would, one way or another, be expensive for all of Europe," Papandreou said. "If the euro retreated, that might help some countries with their exports, but it would for example make importing oil and gas more expensive."

Merkel said that, though Greece has faced the worst problems, Germany and other European Union countries have also had to implement austerity measures amid the global economic crisis.

"We have a very good understanding of each other," she said.

French Finance Minister Christine Lagarde said Friday that Sarkozy would back Greece if its debt woes got it into real trouble.

While she told LCI television that Sunday's meeting would focus on how the Greek government's new austerity plans will be enacted, she also said she expects Sarkozy will tell Papandreou that France would be there if Greece got into real difficulties. She did not explain what form that support would take.

Friday's strike saw state schools closed, while hospitals functioned with emergency staff and all Athens public transport was idle. An air traffic controllers work stoppage from 1000GMT to 1400GMT canceled dozens of flights, while journalists also walked off the job for a few hours.

"In emergencies, governments take emergency measures," he told lawmakers during the austerity law debate. "Will we succeed? Yes, we will. Will we have to take further measures? No, provided we implement the program we have submitted. And we will."