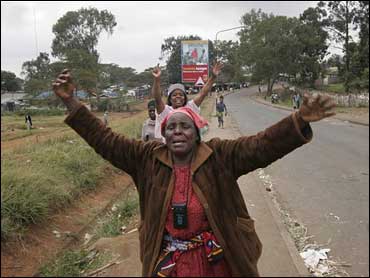 Kenya's newly re-elected president promised Monday to crack down on explosive riots that stretched from the shantytowns of the capital to the sweltering coast, killing at least 135 people after a vote that opponents say was rigged and observers say was suspicious at best.

The opposition retreated from a planned rally Monday, but called for a million people to march later this week, setting the stage for worsening turmoil in a regional economic powerhouse that has been East Africa's most stable democracy.

Fighting Monday brought much of the country to a standstill as residents stocked up on food and hunkered down in their homes for a third day. In the slums, where one-third of Nairobi's population lives, rioters waved machetes and shouted President Mwai "Kibaki must go!" Police beat them back with truncheons, tear gas, and live bullets fired in the air.

"We are ready to die and we're ready for serious killings," 24-year-old James Onyango, who lives in Nairobi's Kibera slum, told The Associated Press as the homes and shops around him burned.

The opposition candidate, Raila Odinga, called his march for Thursday on Uhuru Park, where protesters seeking multiparty democracy gathered in the early 1990s. Police had warned him not to rally Monday, and teams of riot police were deployed in Kibera and the Mathere slum, blocking residents from the city.

"We are calling for mass action," said Odinga, who had been leading Kibaki in early results and public opinion polls before his lead evaporated overnight. "We will march wearing black arm bands because we are mourning."

Odinga may have headed off more violence by calling off Monday's rally, but the situation was tense.

Much of the rioting in the slums has exposed Kenya's festering tribal resentments, with youths shouting vicious ethnic slurs. Odinga, is a Luo, a major tribe in Kenya that has long felt marginalized. Kibaki is Kikuyu, the country's largest tribe and one that has dominated business and politics since independence in 1963.

The slums are often divided along ethnic lines. The head of Kenya's Red Cross said many of the dead were killed in ethnic violence across the country.

Riots also erupted in opposition strongholds in western Kenya, the tourist-friendly coast and the Rift Valley. At least 135 people were killed since Saturday, according to police, morgues and witness accounts. Three police officers told The Associated Press independently that they had been ordered to shoot to kill to stop the rioters. A government spokesman denied such an order was given.

Kibaki, in a New Year's message to Kenyans, said his government will "deal decisively with those who breach the peace by intensifying security across the country."

Odinga, who came in second according to Sunday's official results, compared Kibaki to a military dictator who "seized power through the barrel of the gun."

The U.S. State Department expressed serious concerns Monday about what it called irregularities in the vote count. Tom Casey, deputy spokesman at the State Department, suggested the United States is not ready to recognize any winner.

The European Union also questioned the outcome. "We have doubts about the accuracy of the presidential results," said Alexander Graf Lambsdorff, the chief European Union election monitor.

The violence, Odinga's resolve and the cool international response to his victory could put pressure on Kibaki, 76, to find a way to compromise with his opposition.

Kibaki was sworn in almost immediately after the results were announced Sunday. Within minutes, the slums exploded into fresh violence, tainting a vote that initially was praised as calm and orderly, a beacon of hope for democracy in Africa. If Kibaki had lost, he would have been the first sitting president ousted at the ballot box in Kenya.

Allegations of rigging were fueled by the fact that opposition took most of the parliamentary seats in Thursday's vote, but Kibaki still won the presidential election. A ban on live media broadcasts allowed wild rumors to flourish, spread by text message and shouted from neighbor to neighbor across barbed wire fences and winding alleys.

The bloodshed is a stunning turn of events in one of the most developed countries in Africa, with a booming tourism industry and one of the continent's highest growth rates.

Kibaki's supporters say he has turned Kenya's economy into an east African powerhouse, with an average growth rate of 5 percent. He won by a landslide in 2002, ending 24 years in power by the notoriously corrupt Daniel arap Moi. But Kibaki's anti-graft campaign has been seen as a failure, and the country still struggles with tribalism and poverty.

Odinga, a flamboyant 62-year-old with a son named Fidel Castro, cast himself as a champion of the poor. But his main constituency is Kibera, where some 700,000 people live in breathtaking poverty, and he has been accused of failing to do enough to help them in 15 years as a member of parliament.

Alex Busisa, a resident of Kibera who was during the riots, said it's always the poor who bear the brunt.

While politicians "could afford a plane to fly away ... it is the man on the ground who suffers, like me," Busisa said from a hospital bed after an operation for a gunshot wound to the stomach.
© MVII, CBS Interactive Inc. All Rights Reserved. This material may not be published, broadcast, rewritten, or redistributed. The Associated Press contributed to this report