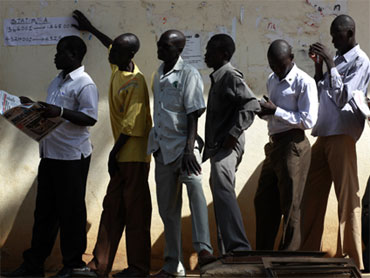 JUBA, Sudan - Men and women walked to election stations in the middle of the night Sunday to create a new nation: Southern Sudan. Some broke out into spontaneous song in the long lines. And a veteran of Sudan's two-decade civil war, a conflict that left 2 million people dead, choked back tears.

"We lost a lot of people," said Lt. Col. William Ngang Ayuen, who was snapping pictures of camouflaged soldiers waiting in long lines to vote. The 48-year-old turned away from his comrades for a moment to maintain composure.

"Today is good for them."

Thousands of people began casting ballots Sunday during a weeklong vote to choose the destiny of this war-ravaged and desperately poor but oil-rich region. Because only 15 percent of southern Sudan's 8.7 million people can read, the ballot choices were as simple as could be: a drawing of a single hand marked "separation" and another of clasped hands marked "unity."

Long lines snaked through the southern capital of Juba. In rural areas, tribesmen carrying bows and arrows walked dirt paths from their straw huts to one-room schools to vote.

Almost everyone - including Sudan's President Omar Al-Bashir, who has been indicted for war crimes in the western Sudan region of Darfur - agrees that the mainly Christian south will secede from the mainly Muslim north.

"We are saying goodbye to Khartoum, the capital of old Sudan. We are coming to have our own capital here in Juba," said Tom Drani, a 48-year-old motorcycle taxi driver. He predicted 100 percent support for independence or something close to it.

Southern Sudan is among the world's poorest regions. The entire France-sized region has only 30 miles (50 kilometers) of paved roads. The U.N. says a 15-year-old girl here has a higher chance of dying in childbirth than finishing school.

Southerners, who mainly define themselves as African, have long resented their underdevelopment, accusing the northern Arab-dominated government of taking their oil revenues without investing in the south.

This week's referendum is part of the peace deal that ended the 1983-2005 civil war between the north and south. Northerners had no say in the voting process and the western region of Darfur, which belongs to the north, is not affected by the vote.

Independence won't be finalized until July, and many issues are yet to be worked out, including north-south oil rights, water rights to the White Nile, border demarcation and the status of the contested region of Abyei, a north-south border region where the biggest threat of a return to conflict exists. Most of Sudan's oil is in the south, while the pipelines to the sea run through the north, tying the two regions together economically.

Southern Sudan President Salva Kiir, wearing his trademark black cowboy hat, was visibly emotional as he remembered those killed in the north-south war. Kiir voted at the mausoleum of rebel hero John Garang.

"I am sure that they didn't die in vain," he told the crowd. Women chanted and one man waved a sign saying: "A road toward sovereignty. A new nation to be born on the African continent!!!"

Many voters lined up in the middle of the night, and some slept at the site of Garang's grave. Among the voters was Julia Kiden.

"We feel that after the referendum we will be delivered from oppression from the north," the 37-year-old said.

President Barack Obama hailed the start of the referendum, which he said will have consequences not only for Sudan, but also for sub-Saharan Africa and the world.

"We know that there are those who may try to disrupt the voting," Obama said in a statement. But he called on those who oppose the poll to allow it to go forward without "intimidation and coercion."

Foreign officials including former U.S. President Jimmy Carter, Sen. John Kerry and actor and Sudan activist George Clooney were in Juba for the start of the vote. Former U.N. Secretary-General Kofi Annan told a news conference that most people in Sudan are tired of war.

"There is enough in history to tell us that enmity between peoples need not last forever, and bitter enemies have made peace, and today many parts of the world live peacefully together and it can and should happen here also in Sudan," he said.

Sudan, geographically the largest country on the continent, will lose a third of its land, nearly a quarter of its population and much of its oil if the south secedes. Khartoum's only consolation will be that the pipelines to get the product to market all run through its territory.

The U.S. offered Khartoum a range of incentives for a peaceful southern vote, including removal from its list of state sponsors of terrorism. In recent weeks Al-Bashir has sought to play down fears of potential violence, saying the north will accept a vote for secession.

"The world will be watching in the coming days, and the United States will remain fully committed to helping the parties solve critical post-referendum issues regardless of the outcome of the vote," Obama said in the statement.

There were reports of violence in Abyei, a region that had also been scheduled to hold a self-determination referendum but whose fate will now be settled by north-south negotiations.

Bashtal Mohammed Salem, a leader of the Arab Misseriya tribe, said six Misseriya herders were killed Sunday and one killed Saturday in attacks by southern security forces. Attempts to mediate the dispute and end the violence were ongoing.

Carter, who greeted voters in Juba on Sunday while wearing a bright blue Carter Center T-shirt, told The Associated Press in an interview that Abyei is a "flashpoint" and a test case for the north and south. But he said Al-Bashir has little choice but to stand by his pledge of no return to violence.

"Bashir has made that statement not only to me and to the people of the south but to the world, and that includes the military and political elements of the United Nations and the promises he made to his fellow leaders in the African Union," Carter said. "I think that there would be severe self-condemnation of himself if he doesn't go forward with the peaceful acceptance, and also he doesn't have any alternative, except to go to war."

Clooney, who has been working to raise awareness about a potential return to war and who visited Abyei on Friday, told the AP on Sunday that a deal isn't reached on the future of Abyei - whether it goes with the north or south - then the secession process could implode. "If you underestimate that, that will bring us back to war," he said.

Many of the 1 million southerners who fled the region because of the violence - which began shortly after Sudan was given independence from joint British-Egyptian control in 1956 - voted elsewhere. Polling sites were set up in eight American cities, where voters included some of the 3,800 war orphans known as the Lost Boys of Sudan.

In Chicago, basketball star Luol Deng - a native of Sudan who moved to London as a child to escape the conflict in his homeland - arrived at the office-turned-polling station on the city's North Side to a hero's welcome.

"A lot of people have fought for this day, a lot of lives have been lost over this and now we have a say," Deng said. "All we could do in the past is run. Now we're here today to show we're not running, we're here to make a difference."

About 117,000 southerners who live in the north also registered to vote, but the scenes at polling stations in Sudan's capital of Khartoum were far removed from the joyous scenes in the south.

Many southerners fear retribution from northerners if they vote. A large billboard in downtown Khartoum featured a picture of al-Bashir in feathered southern headgear with the words: "No to separation, together, together."

"I voted today, and frankly, I voted for unity," said Aldod Akon Deng, 65, who is originally from the south. "I am here since 1964. My kids are all born in Khartoum. That's why I voted for unity. I've been raised here. My family grew up here. Even if there's separation, I'll stay here."

About 3.9 million people registered to vote. A simple majority must vote for separation for the referendum to pass, but 60 percent of registered voters must cast ballots for the vote to be valid. Results will trickle in after polls close Saturday, but results won't be finalized until February.