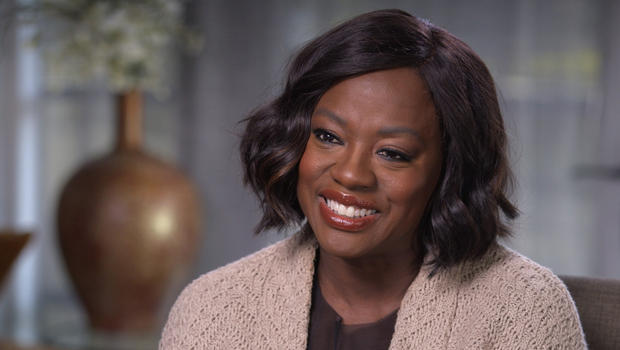 Viola Davis won an Oscar nomination for her performance in the 2011 film “The Help.” And there’s already Oscar talk this year about her role in the movie “Fences.” Lee Cowan has a Sunday Profile:

“It’s like, I played the doctor, I played the lawyer, I played all those roles, but you didn’t know who I was. And that was getting tiresome,” said Viola Davis. “And you know why? The thing about it is, you could create the most specific emotional life for a character, but nobody sees it if you don’t have the words. It’s like having a great body and being in a burlap sack!”

Davis has found her words, in the words of August Wilson, the Pulitzer Prize-winning playwright whose most popular work, “Fences,” just went from stage to screen.

Set in 1950s Pittsburgh, Davis just won a Golden Globe for playing the long-suffering wife of Troy Maxon, portrayed by the film’s director, Denzel Washington. She is the glue that holds a family together, through racism, infidelity and more. Davis and Washington both won Tony Awards for the same roles on Broadway.

But adapting the story to film was a tricky thing.

“I always feel that people want to problem-solve once the play goes to the screen. So the fear in not making it stagy and making it a cinematic experience; what you do is, sometimes you can reduce the impact of it.”

The film pulls no punches. “When people come into the theater, whether it’s the screen or the stage, they’ve gotta be transported and transformed,” Davis said.

You know you’ve made it when actress when Meryl Streep sings your praises, as she did on the Hollywood Walk of Fame, where Davis recently got her star.

“The thing that Viola can’t do is be invisible,” Streep said. “She just can’t do it. She can’t fade away. She can’t recede. She can’t be forgettable.”

The two first appeared together in the film “Doubt.” She only appears on screen for a few minutes, but it was enough to get Davis her first Oscar nomination.

Cowan said, “Even if it was only going to be four or five minutes on screen, you would delve into that as if it was the lead role.”

“Absolutely,” Davis said. “I say I would make a filet mignon out of a fried chicken dinner!”

She had a lot of fried-chicken roles -- parts that she fit first, she says, for her looks, and then for her talent.

“I have a deep voice. I probably have the ‘character look’; I am a woman of a certain hue. Those roles, those kind of diverse roles weren’t being written for anyone who looked like me.”

She got her second Oscar nod for playing housemaid Aibileen Clark in “The Help.”

It’s only recently Davis has been landing parts not so culturally trivial, like her Emmy-winning turn as Annalise Keating, a powerhouse of a defense attorney on ABC’s “How to Get Away With Murder.”

In the center of the narrative, Davis said, “is an African-American woman who is 51 years old, who’s not a size 2, who is not being placed in a box.”

Her determination to stand out started at age eight. “I knew that Viola was, like, a tremendous actress,” her sister, Deloris, told Cowan. “It was so natural. And we all would stop just to watch her do the scene.”

Deloris should know. She’s now the drama teacher at their old high school in Central Falls, Rhode Island. Cowan asked of her students, “Do they expect more out of you, in some sense? Are your expectations raised somehow?”

“Yes, the expectations are raised,” Deloris replied. “They think I’m gonna make them a star!”

Central Falls is as proud of Davis as Davis is of it, even though her upbringing here was about as gloomy as the weather the day Cowan visited.

The Davises were the only black family in town. Her dad got a job as a horse groomer at the nearby track. Money wasn’t only tight, it was almost non-existent.

“I literally would dream about having food in the refrigerator and in the cupboards,” Davis said.

She took Cowan to the school cafeteria (“Much smaller than I remember!”), which for years was her only source of nutrition.

“For most of my life it was the only meal. And knowing that when I went home there was nothing there in terms of food.”

“Does that hungry little girl still with you today?”

Her house, on the other hand, is long since gone. But the memories of the cold, and the rats, are as fresh as yesterday.

“The infestation was so unbelievable,” Davis said. “And sometimes they would jump on top of us on the beds and then you could hear them eating our toys at night. Just the crunching sound.”

Davis’ yearbook is telling. She listed “When I’m rich and famous” as her favorite saying -- but that had nothing to do with growing up to be an award-winning actress.

“When you’re poor, you are invisible,” she told Cowan. “Every poor person will tell you, nobody sees you. So being famous was me just wanting to be seen.”

Being seen as much as she’s been seen lately certainly can be tiring. But she feels an obligation to give back, and as such, she and her husband, actor Julius Tennon, started JuVee Productions with the goal of broadening the kinds of roles offered to black artists.

“I just want different narratives for people of color, especially women of color,” she said. “I just want something that’s different. I don’t want us to be put in a box. I want it to be kind of a redefinition of who were are. If I can even achieve that in a tiny way, I’ll be good. I’ll be good.”

But of all roles, nothing, she says, has had a greater impact than becoming a mother.

The couple adopted their daughter, Genesis, five years ago, and Davis is there, even for drumming lessons.

“You could be a bad actor, and that’s really hurtful by the way, when people think you suck! Even if you’re like a bad daughter, you know, you can maybe work through that. But you cannot be a bad mother. You just can’t!”

With Genesis at her side, Davis accepted the honor of having a street named after her back in Central Falls.

To those with dreams, sitting in that same school auditorium where Viola Davis first took to the stage as a poor and hungry little girl, she had but a single message:

“There’s got to be a voice deep within you that is untouched by definitions. And it is there that you become divinely who you are. And that is the one gift I plant in every young person in Central Falls, is that your dreams are absolutely much bigger and untouched by your circumstances.”