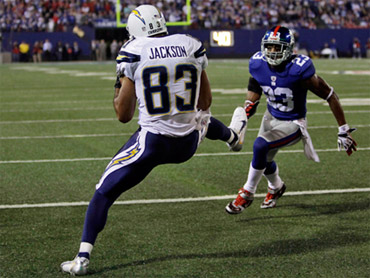 Holdout wide receiver Vincent Jackson remains the property of the San Diego Chargers despite his agent saying he had deals in place with several teams before the Wednesday deadline.

Agent Neil Schwartz said he heard from multiple general managers, whom he declined to identify, that the Chargers were asking for "wholly unreasonable" compensation for Jackson, a Pro Bowl player who had two straight 1,000-yard seasons. Schwartz said another GM told him that Chargers general manager A.J. Smith seemed to be "squatting" on Jackson.

"Archie Manning had it right about this organization," Schwartz said.

He was referring to when Manning had agent Tom Condon contact the Chargers days before the 2004 draft to ask that the team not take his son, Eli, with the first pick. Smith did anyway, then swapped Manning's rights to the New York Giants for the rights to Philip Rivers and several draft picks.

"Multiple teams have told me that they can't get a deal done with A.J. and some of the teams have referred to A.J. as 'The Lord of No Rings,' " Schwartz said. "That's how they characterized him."

North County Times columnist Jay Paris dubbed Smith "The Lord of No Rings" after Eli Manning and Ben Roethlisberger, the other members of the Big Three QBs of the 2004 draft class, led their teams to Super Bowl victories. Rivers and Smith have yet to make it to a Super Bowl.

Smith, who has a history of hardball dealings with players, didn't return a call seeking comment.

Schwartz said the legal language with one team was already drawn up and ready for Jackson to read and sign. That was a one-year deal with an option, with an average salary of more than $9 million. Schwartz declined to identify that team. It was widely reported that the Minnesota Vikings were a major suitor.

Under terms of a deal arranged by the NFL and the players' union, Jackson had to sign a new contract by 4 p.m. EDT Wednesday in order to play for a new team in Week 5. Now, he'll have to finish serving the remainder of his three-game suspension for violating the NFL's substance abuse policy — he pleaded guilty in February to his second DUI since 2006 — and serve a three-game suspension on the roster exempt list if he does sign.

Had a deal been done before the deadline, Jackson would have been placed on the Commissioner Exempt list for three games, retroactive to Game 2. That essentially would have rolled six games worth of suspensions into four games.

Those suspensions seem to be moot because Schwartz said it's unlikely Jackson will play this season under teams of the team's contract tender.

"Not now, not ever," Schwartz said. "Again, it's up to the Chargers. He's got nothing with Norv Turner. He loves the city of San Diego. He loves catching the ball from Philip Rivers."

Said Rivers: "I wish him all the best. I'd love to get the opportunity to throw to him again but if that's not the case, I want it to work out for him."

"It's been the same since we started camp. We get the guys ready who are here," the coach said.

Jackson's original five-year contract expired after last season. But because this is an uncapped year, he would have needed six seasons to become an unrestricted free agent.

Unhappy over not receiving a long-term deal in the offseason, Jackson refused to sign the one-year, $3.268 million contract he was tendered as a restricted free agent. When he and holdout left tackle Marcus McNeill didn't sign their tenders by June 15, the Chargers were entitled to offer them 110 percent of their 2009 salaries, essentially cutting $2.5 million off the tenders. If either reports this year, it would be for the final six games in order to accrue a season toward unrestricted free agency.

Smith placed Jackson and McNeill on the roster exempt list on Aug. 20. He used the same tactic on tight end Antonio Gates in 2005. Gates missed the opener, a close loss to the Dallas Cowboys that helped contribute to the Chargers missing the playoffs that year.

A person with knowledge of the discussions said the Vikings and Chargers did have discussions about Jackson. The person requested anonymity because he was not authorized to speak publicly about the negotiations.

With Pro Bowl receiver Sidney Rice out for at least another month and reigning offensive rookie of the year Percy Harvin not practicing on Wednesday because of a migraine headache, the Vikings only have four healthy receivers on the roster, none of whom have been productive in 2010.

Bernard Berrian, Greg Camarillo and Greg Lewis have combined to catch seven passes for 89 yards in the first two games and the Vikings signed free agent Hank Baskett on Wednesday to add some depth.

Coach Brad Childress declined to discuss Jackson specifically when he spoke to reporters on Wednesday a little over an hour before the deadline passed.

But the coach was asked in general terms about the team's willingness to part with high draft picks to bring in a player for the final 12 games of a season who may not sign a long-term deal.

The Vikings have traded draft picks for marquee players before, including in 2008 when they sent a first-round draft choice and two third-rounders to Kanas City for defensive end Jared Allen. But the Vikings also signed Allen to a long-term contract before making the deal, ensuring that the high price they paid would keep him in Minnesota for the long run.

"They're your bartering tool," Childress said of draft picks. "That's how you build with younger talent. If you do something for a guy like a Jared Allen, you want to know what you're giving is commensurate with what you're getting."