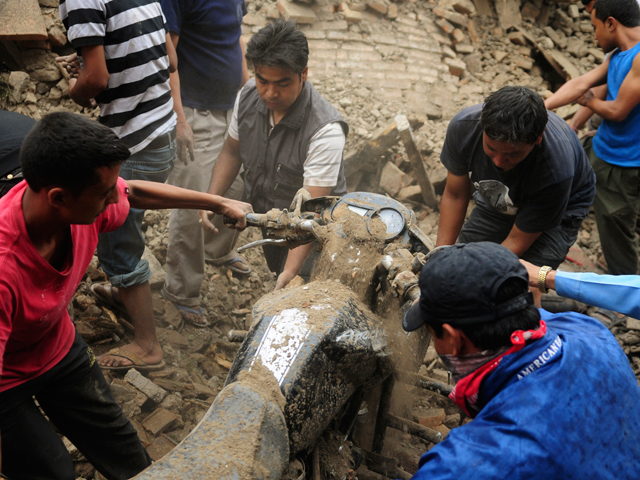 GANGTOK, India - Rescue workers dug through mudslides as they struggled Monday to reach thousands of villagers cut off by a powerful earthquake that killed at least 53 people and damaged more than 100,000 homes in mountainous northeastern India, Nepal and Tibet.

Heavy rains slowed the relief effort and made conditions miserable for many homeless villagers as they prepared to spend the night outside.

Nine helicopters dropped food to villages, airlifted a medical team, evacuated the injured and conducted damage assessments, Singh said. Heavy construction equipment was used to clear some of the blocked roads, he said.

"The rescue and relief operations are in full swing though they were hampered ... by poor weather," Singh said.

By midday Monday, workers had managed to clear mudslides from one lane of the main highway leading to the Indian state of Sikkim, where the quake was centered near the Nepal border, Singh said. An initial convoy of 75 paramilitary soldiers started moving toward Mangan, the village closest to the epicenter, but still had not arrived by evening.

At least 32 people died and 100 others were injured in Sikkim, Singh said. At least 10 of them worked for the same hydroelectric project, but it was not immediately clear how they died.

Seven other people were killed in the neighboring Indian states of Bihar and West Bengal, Singh said.

Nepal's government said seven people died there, including two men and a child who were killed when a brick wall toppled outside the British Embassy in the capital, Katmandu. Nearly 70 people were injured, some of them seriously, and were in hospitals across Nepal.

Most of the deaths in India occurred when houses, already weakened from recent monsoon rains, collapsed due to the force of the quake. More than 100,000 homes were damaged in Sikkim state alone, state officials said.

Singh said it was still unclear what the final toll might be.

"There may still be villages where people are trapped under collapsed houses that we have not been able to reach," he said.

In West Bengal state, utility workers toiled to restore power to a large swathe of the state which plunged into darkness after power lines were snapped by the quake.

The region has been hit by major earthquakes in the past, including in 1950 and 1897.