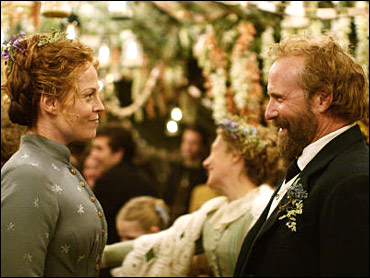 Fright maestro M. Night Shyamalan scared up his latest No. 1 debut with "The Village," a tale of an isolated town menaced by bogey men in the woods that had a $50.8 million opening weekend.

"The Village" bumped off the previous weekend's top movie, "The Bourne Supremacy," which slipped to No. 2 with $23.4 million, bringing its 10-day total to $98 million, according to studio estimates Sunday.

Denzel Washington's remake "The Manchurian Candidate" opened at No. 3 with $20.2 million. The update of the 1962 assassination thriller co-stars Meryl Streep and Liev Schreiber.

The weekend's other wide releases flopped. "Harold & Kumar Go to White Castle," about two stoned pals on a comic quest for burgers, premiered at No. 7 with $5.15 million. The family sci-fi saga "Thunderbirds," featuring Ben Kingsley and Bill Paxton in an update of the cult TV series, debuted at No. 11 with $2.7 million.

With a budget of just $9 million, "Harold & Kumar" poses no financial hardship for distributor New Line. "Thunderbirds," which cost $57 million to make, could present a hefty loss for distributor Universal.

Overall revenues rose, with the top 12 movies taking in $140.4 million, up 6.5 percent from the same weekend last year.

Hollywood's domestic grosses are running at about $3 billion since early May, $200 million ahead of the pace of last year's record summer of $3.9 billion, according to box-office tracker Exhibitor Relations.

The industry enters the summer homestretch on a solid run, with three straight movies - "I, Robot," "The Bourne Supremacy" and "The Village" - debuting with more than $50 million. Coming Friday is Tom Cruise's thriller "Collateral," and the following weekend brings the sequel "Princess Diaries 2: Royal Engagement" and "Alien vs. Predator," a potential sleeper success on the order of last year's "Freddy vs. Jason."

"We're on a pretty good roll right now," said Paul Dergarabedian, Exhibitor Relations president. "This is a very strong way for summer to wind up. Usually, by August, things are really slowing down."

"The Village" was writer-director Shyamalan's second-best debut behind the $60.1 million opening weekend for "Signs" in summer 2002. Shyamalan's top-grossing film, "The Sixth Sense," debuted with an unremarkable $26.7 million but gradually climbed to blockbuster status with $293.5 million.

The movie, whose ensemble cast includes Joaquin Phoenix, William Hurt and Bryce Dallas Howard, broke a string of duds for distributor Disney, whose 2004 releases include the bombs "The Alamo" and "Around the World in 80 Days."

"It makes it so much more fun. I'm sitting in the office right now, and I can't tell you how thrilled I am," said Chuck Viane, Disney head of distribution. "Sometimes, you come in and it's not as much fun."

The romance "Garden State," from writer, director and star Zach Braff, opened strongly in limited release with $185,000 at just nine theaters. The movie expands into nationwide release through late August.