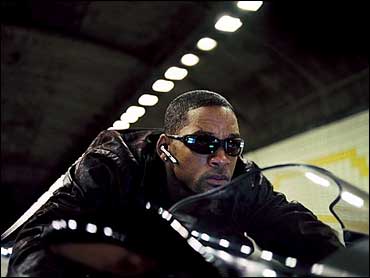 Will Smith knows a thing or two about summer blockbusters. With the huge success of "Independence Day," "Bad Boys Two," and both "Men In Black" films, many in Hollywood call July "Big Willie Month".

He looks to keep that winning streak going this year as a futuristic police detective investigating an unlikely murder in "I, Robot." The movie debuted at the top of the box office this weekend and marked Smith's best opening ever.

The film is based on science fiction author Isaac Asimov's short stories about robots. Smith says he embraced the idea of working with a digital character and tells The Early Show co-anchor Harry Smith it is not a film of just special effects.

"This film marks what I believe is the most complete film I've ever made," Smith says. "With the eye candy - we got explosions, robots, all of that- but the director, I think, has created a story that is almost a small art film, wrapped in a big summer blockbuster. "

Directed by Alex Proyas, the movie stars Smith as Detective Del Spooner who is robophobic. "That's the term we use in the film. He's robophobic," Smith explains. "He had a bad experience with robots, and 2035 Chicago is a time where robots live and work amongst us and have never committed a crime and essentially have adhered to these laws perfectly."

Robots are trusted as a part of everyday life, until Spooner investigates a murder that may have been committed by one of them.

For his role, he says he had to be in top shape, and the result has been women screaming when they see his body.

"That's my first, like, completely naked scene," he says. "It was more than naked. It was a little weird with grips standing around."

And aside from his wife, he says, he usually doesn't get that type of reaction from female viewers.

"That's what I'm used to with Jada. For the most part, I get, 'Will is so sweet.'" But after watching the film with a crowd, he says he even heard growls from the audience. "I heard a woman go, 'mmmrrrrrrrrrr.' I'm, 'What was that?' I mean Denzel gets that reaction. I don't get that one."

He also got some disappointing looks from his wife after crashing his motorcycle. "It was in rehearsal," he says. "The little boy in the movie is always going to be playing and he came out and was playing on a motorcycle and I shouldn't have done that. I'm sorry, sweetie. I'm sorry. I'm not going to hurt myself."

Asked if he made a pact with Jada Pinkett not to do more stunts after that, he says, "I had made a pact before that. That was part of the problem."

The film opened nationwide on July 16.

Fast Facts About Will Smith: