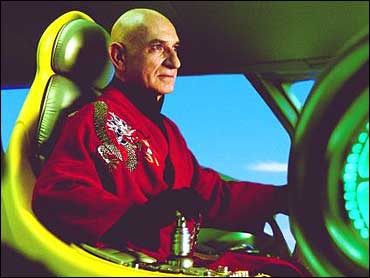 Oscar winner Sir Ben Kingsley is widely considered one of the finest actors of this era.

Last year's performance in "House Of Sand And Fog" earned him his fourth Oscar nomination.

In a slight departure from his more serious dramatic roles, Kingsley plays a master criminal called The Hood in his new action adventure movie, "Thunderbirds."

"He so enjoys being himself and that, to me, is liberating and joyful. He has this huge ego. He's eaten up with revenge," Kingsley tells The Early Show co-anchor Hannah Storm about his character.

Set in the year 2010, the film is based on the '60s British television series of the same name, a cult favorite that followed the adventures of the Tracy family and their astounding fleet of International Rescue vehicles.

"The Thunderbirds are a group of young people and vehicles," Kingsley explains, "They travel around the world under the title of International Rescue. That is to say, if there is any terrible crisis anywhere, they will galvanize themselves and launch their craft and they will go to anything that needs rescuing. I think rescuing is a beautiful word and I think the film is really touching and beautiful and enormous fun. It's glorious to look at."

Kingsley plays the Thunderbirds' arch nemesis, whom Jeff Tracy once vanquished and left for dead.

He describes his character as "a classic dark hero" who seeks revenge against the Thunderbirds for taking him down. The Hood has spent the intervening years in exile, studying with masters of mental telepathy and martial arts to develop powers that allow him to use bursts of energy to manipulate men's minds.

His adult children actually grew up watching the show on TV. Kingsley notes, "'The Thunderbirds' was a favorite of ours as much as maybe 'Mr. Rogers' and 'Sesame Street' was a favorite of yours. It's very bonding to watch something with your children like that. You wouldn't ever think in your adult life you'd sit and watch 'The Thunderbirds,' puppets flying around the world rescuing people, but there is something endearing and decent about them in our film that reminded me watching with my older children who said, 'Dad, you've got to do this.' So how could I say no? I want to do anyway. I really did. How could I say no to The Hood?"