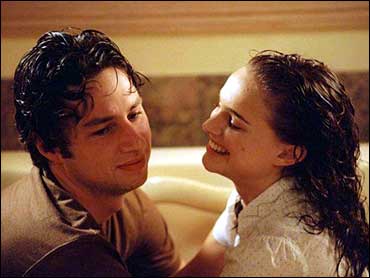 At 23, Natalie Portman already is a 10-year film veteran who is best known for starring as Senator Amidala in "Star Wars: Episodes One and Two." But her latest film has no special effects in sight.

"It's always fun to do something different; challenge yourself in new ways." Portman tells The Early Show co-anchor Rene Syler. "This is great, because it's 25 days. We didn't have the time or money to take two hours of lighting. So it was sort of this energy rush of speeding ahead. It was really fun. "

In the low-budget "Garden State," which was a hit at the Sundance Film Festival, Portman plays a self-professed compulsive liar who finds love at a doctor's office.

According to the movie's production notes, Andrew Largeman (Zach Braff) shuffles through life in a lithium-induced coma until his mother's death inspires a vacation from the pills to see what might happen. A moderately successful TV actor living in Los Angeles, this guy (known as "Large") hasn't been home to the "Garden State" (New Jersey) in nine years. But even with 3,000 miles between them, he's been unable to escape his domineering father, Gideon (Sir Ian Holm), and the silencing effect he's had on his son from afar.

Stunned to find himself in his hometown after such a long absence, Large finds old acquaintances around every corner living unique lives as gravediggers (Peter Sarsgaard), fast-food knights and the panderers of pyramid schemes. Meanwhile, at home, he does his best to avoid a long-simmering but inevitable confrontation with his father.

By a twist of fate, Large meets Sam (Portman), a girl who is everything he isn't. A blast of color, hope and quirks, Sam becomes a sidekick who refuses to ride in his sidecar. Her warmth and fearlessness give Large the courage to open his heart to the joy and pain of the infinite abyss that is life.

Your Mole May Be Telling You Something

Portman explains, "He's sort of estranged from his family and home and life. And he has to reacquaint himself with all that. And he sort of has this emotional breakthrough, because all of that estrangement has left him numb."

Zach Braff, the writer, director and star of "Garden State" notes, "I wanted to make a smart love story for young people, and I wanted to make a movie that got across the genuine feeling of what it's like to come home."

It's a comedy, but as Portman says, "It allows itself, like Sam the character allows herself, to just be as sort of bizarre as it feels like being. It's funny, but it's warm. It's sweet and well-meaning and it isn't cool."

About Braff she says, "He really was just amazing at it. He did a wonderful job and he was really fluid between everything. I think he did everything with a lot of humor, which helped us all have a good time."

When it came to casting the film, Braff says he was "incredibly lucky."

"I remember thinking it would be amazing to get someone in the spirit of a Natalie Portman, someone like Ian Holm, someone like Peter Sarsgaard," the director recalls. "We never imagined in a thousand years we would actually get them. But one by one, they all signed on. We were in shock."

Asked if she is ready to put "Star Wars" behind her, Portman says, "I don't think it will ever be gone forever because it's been such a big part of my life. So many people have seen these films now that I think it is always a piece of you. But every end is a beginning so it's always sort of bittersweet."