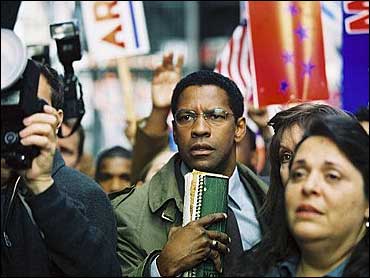 "The Manchurian Candidate" is a modern retelling of the 1962 political thriller, which starred Frank Sinatra, Lawrence Harvey and Angela Landsbury.

Some critics have wondered, why remake such a classic film? But Washington recently told The Early Show entertainment contributor Jess Cagle, that he doesn't understand the big fuss over the remake.

"I think people make more out of that than they should," Washington said. "And there's nothing about films that are so precious they can't be redone. Plays are redone all the time. You know? It's no finer material than Macbeth, that's for sure."

In "The Manchurian Candidate," Washington plays the role Sinatra originated, a soldier who uncovers a corporate plot to rig a U.S. presidential election. Before he realizes that he was brainwashed during overseas duty, his bizarre, violent nightmares begin to drive him crazy.

Washington explains, "I think that as a good soldier; he was putting on a good front. This guy with all his rewards and he looks so together, and he's like the poster child for Colin Powell enterprises or something. And then you go to his house, and even the body language, the way he moves, there's obviously something very wrong."

Despite the movie's plot, the filmmakers say they did not set out to make a political movie. Still, for Washington politics, the film's timing is perfect.

"It's a good year for a film like this," he says. "I think people are looking at the other side of everything. I think that one of the good things about, 'Passion of The Christ,' is, it said, 'Hey, we can disagree about a movie; it can be engaging.' We cannot believe in it, or believe in it and still want to go see it. Same thing with, 'Fahrenheit.'

And yet Washington says it is not hard for him to stay away from politics when he is talking about this film.

And at the same time, he notes. "I don't need to stay away from politics. I mean, talking about politics is different than people asking you whom you're going to vote for. That's something personal. But, I think the kinds of conversations that a film like this might initiate are good."

The film also stars another two-time Oscar winner, Meryl Streep, as a powerful U.S. senator. But if you were hoping to see the great actors together on screen, think again. The two stars have almost zero screen time together. Some moviegoers may be disappointed. Washington certainly is.

"I'm an extra in the scene with Meryl Streep," he says laughing. "I'm turning 50, I'm a two-time Academy Award Winner; I finally made it. I'm an extra. I was surprised at how regular and funny she is. I should know better of all people. Because, people think you're what they see up on the screen."

No, she wasn't at all dame Meryl, Washington points out. "She's just a hoot, very vulnerable and funny and smart, and not so sure of herself, either. You know, she's great. I hope one day to work with her."

It's been two decades since Washington's performance in "A Soldier's Story" made critics take notice and turned him into a movie star.

"Twenty years ago when I did that movie, acting was my life," Washington reflects. "In that same year, we had our first son. Acting now is making a living. That's life. That's the miracle of life. That's the main difference. I use a quote from Julia Roberts, 'I'm just an ordinary person with a extraordinary job.' You know, not the other way around."

He is an ordinary person with four kids. His extraordinary job keeps him away from home a lot, so he's had to learn some crucial parenting skills.

Washington says, "Don't talk down to them, they're smarter than you think, to be around. You know, when I finished, 'Manchurian,' in January, I've been home since. Because, you can't come in and start parenting, instant parenting. So, I don't try to come in and parent them too much. I try to come in and listen and just hang around and let the conversation evolve."

Recently, Will Smith talking about his film "I, Robot" said he usually plays "the nice guy" not the sex symbol, a role he said Denzel Washington usually plays.

Asked about that comment, Washington says, "Will is very clever, very clever."

So does he ever see himself as a sex symbol?

"I got a photograph of me in the third grade with braces and glasses, buck teeth," Washington says laughing. "You know, your school photo, that's how I look."

And what about People magazine which had him on its list of 10 sexiest men?

"You know, I don't know," he says. "That's what people say about you. That's not who I am. You know, that's something people say. And I guess that's flattering."

It's not just moviegoers whothink that. Julia Roberts once said, "To call Denzel Washington sexy, is like saying Ernest Hemingway was a good fisherman."

"The Manchurian Candidate" is being released by Paramount Pictures, which is owned by the same parent company as CBS.