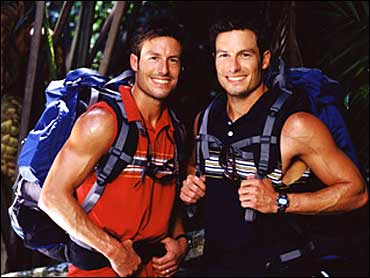 There was a wild finish Wednesday night on "The Amazing Race" as the teams battled to make the million-dollar finale.

The two sets of brothers still in the running were both unable to locate their final clue in Vietnam. But Ken and Gerard received a critical bit of information from Flo that they did not care to share with Derek and Drew, whom they call "the wonder twins."

"We knew we were the last. It was the most frustrating thing ever. It really was. I mean, after the first two hours of looking for that like the box," says Drew, referring to the blue box that was kind of hidden behind the greenery.

But that was not their only problem. Their cab passed their marker.

"Well, our taxi had come in at a point when we were way down the road from that flag. We were right at the ferry. So, everyone -- I mean, the Vietnamese people were so nice, and they're trying to direct you, and help you and, in actuality, they were sending us the wrong way," says Derek.

The clue they were supposed to find was a Roadblock in which one team member had to hop onto a bicycle taxi and transport his fellow teammate along a trail marked by yellow flags, which led to a dock where teams were to take a ferry across the Saigon River.

While seeking their clue, Derek and Drew (along with Ken and Gerard) ended up at the dock. But something happened that put the wonder twins at a disadvantage.

"There was no doubt in my mind we'd still be in Vietnam right now if Flo hadn't tipped off Ken and Gerard and then we hadn't run over there," says Drew.

Flo and Zach, who were in last place, did find the clue, and while on the ferry spotted Ken and Gerard without the bike and told them to go back. But Derek and Drew were not there in time to hear the tip.

"She thought we were so far ahead I'm sure she was just thinking that they were in last place. When a team is in last and you know they're going to be last, you just want them to get it over with because it can be very frustrating. I think that's all it was, really, because we got there so far ahead of Ken and Gerard and Flo and Zach at that point," explains Drew.

Drew had been flirting with Flo in the past episodes, and they were in an alliance. So is there a relationship to speak of?

"We're still talking. I know it's a very difficult way to really meet someone like that," he says.

"And it's not like, during the race, we can actually see all these outbursts, these wonderful outbursts," he adds about Flo's yelling, crying and whining at Zach.

"That's not the way we saw her," points out Drew.

It is the pressure of the race that brings out the best and the worst in the relationships. Teri and Ian, now in the lead, had their share of entertaining fellow teams with their bickering.

"They're the biggest fighters by far," says Drew.

"They are the dark horse because no one perceived them as a threat. Yet I think they had the most to prove of anyone," says Derek.

"They're the ones that could will to win this," notes Drew. "I can't believe this relationship works. But obviously it does."

"Just like us, I mean, you know. I tend to scream at him in the cars and stuff," says Derek.

"Yeah. That's just the way we communicate, too, when we're under duress and stress," adds Drew.

So what did doing the race together do for their relationship?

"Well, we've always been close. So it wasn't really that. Other than I've just recently got married and have been with my wife mostly, so it's been a huge life-changing kind of thing to, like, divorcing him, in a way, and then being with my wife. So this was a chance to really get back together," says Derek.

A special two-hour finale of "The Amazing Race" airs next Wednesday at 9 p.m. ET/ 8 p.m. Central on CBS.